Sunrise on Monday, August 8 Eric spent the morning working on the dive compressor. The first order of business was standard servicing: changing the oil, filters, and hose. The hose completely disintegrated, so it is probably safe to say it … Continue reading →

Thursday, August 11, 2022 The ship arrived at Ny London in Kongfjorden on schedule and Patrick was one of the kayakers who practiced paddling through brash ice coming off the nearby glacier.  Ny London was the site of a failed marb…

On Friday morning (August 5), the water was again calm and clear when we awoke. We got Kosmos ready for sea first thing in the morning. This included bringing up and securing the dinghy, bringing in and securing the flopper stopper … Continue reading →

Return to the polar ice pack

After the late departure from Longyearbyen, we sailed for Gravnesodden, Svalbard near the northwestern tip of Spitzbergen Island.  The distance is not large, about 173 NM, but we have a partial day at sea before we arrive.  As we sailed north, the weather turned gray and rainy.  The morning was taken up with the mandatory AECO briefings and a bio-security inspection of all our outerwear going ashore.  There was also a repeat of the kayak operational and safety briefing.  There are a lot more people on this voyage, very noticeable in the Discovery Center and all the restaurants.

Internet service once again was non-existant deep in the fjords.

Gravnesodden is on Magdalenefjordet and was the site for whaling operations beginning in the 1600’s.  There are the remains of blubber furnaces and also 134 graves, hence the name Gravnes.  There is also a hunter’s hut we can visit.  Patrick will be kayaking once again, but the temperature is predicted to be only 35 degrees, so much colder than two days ago.

The kayaking turned out to be warmer than expected, with sightings of barnacle geese, arctic terns, fulmars, glaucous gulls, and guillamots, and even a pin tail duck.  Ashore we visited the remains of blubber ovens from the early whaling era and could view the cemetery where 134 men died during the early years.  Many of the remains are now gone due to the permafrost floating the remains to the surface where either weather or polar bears destroyed them.  The area where the graves were located is fenced off and protected from visitors, but photos can still be taken.

It was a busy evening, with the Captain’s welcome reception, the first formal night of this voyage, and then dinner.  We found out there are only 192 revenue passengers on board, compared to 148 on the first voyage.  The USA has the largest complement accounting for 134 guests.  The crew numbers 249, from 45 countries.  In addition, there are a number of contractors still on board to address technical issues should they arise.

Seabourn Venture cruised overnight in calm sea conditions to Texas Bar and Monocobreen.  The final approach was in dense fog.  We passed a Hurtigruten expedition ship anchored further out in the fjord, as well as a sailboat, which eventually anchored at Texas Bar in front of our ship.  Landings were delayed due to the dense fog.

After about one hour, the fog cleared enough to go ashore and do Kayaking.  Today Patrick kayaked with a crew member and departed from the beach for the first time.  Weather was calm, but still a little foggy, so the excursion to Monacobreen was cancelled and the ship headed for the far north.  We arrived at 81 degrees north about 2130 but did not immediately enter the pack ice.

At midnight we were at 81 degrees 45 minutes north and then headed back southwest looking for the edge of the pack ice.

Patrick was up at 0530 and in the bow lounge as Seabourn Venture entered the pack ice.  At 0600 we were out on the bow when a polar bear was spotted having just freshly killed a bearded seal.  The ship stopped and we were able to view the gory aftermath as the polar bear first stripped the blubber from the carcass and started to work on the flesh. 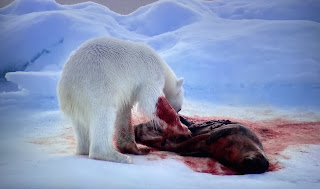 Proceeding further into the pack ice, we all searched for more polar bears, but none showed up.  At noon the ship stopped for the “polar plunge” where a number of brave souls jumped into the 29 degree water north of 81 degrees.  Patrick passed up the opportunity once again.

The ship is now out of the pack ice and headed south for an encounter at Ny London in the morning and 14 July glacier in the afternoon.

Today we had two landings, once in the morning at Gnalodden, Hornsund and the second at Burgerbukta, Hornsund.  These two locations are in the southernmost fjords in Svalbard and are characterized by high cliffs, seabirds and tidewater glaciers.

Gnalodden was our first stop and Patrick kayaked in the morning.  The kayak tour started out windy and choppy, with winds to 25 knots.  We headed down the coast, going with the wind, dodging the occasional iceberg and a number of submerged rocks where the waves were breaking.  Fortunately we did not have to paddle back upwind since our escort boat picked us up in the lee of the last point before the open ocean.

Returning to the landing site we were able to go ashore where there was another hunter’s hut and a massive seabird colony on the cliffs above us.  Some people were attacked by skuas protecting their territory, but Patrick’s bright orange drysuit was apparently not a good target.  There was a overhang with unique acoustic properties, when entering, all noise stopped and you could not hear the birds at all.  Leaving the overhang, the sounds of the seabirds returned.  The vegetation was the usual moss and lichens.

Returning to the ship we had lunch as the ship traveled the short distance to Burgerbukta and a large tidewater glacier that was calving.  Patrick headed back out on a kayak tour, one of only 6 people that showed up.  We paddled under partly sunny skies and glassy calm seas among the iceberg debris from the glacier.  Near the end of the tour we came upon a bearded seal sleeping on an ice floe and were able to just sit quietly only a couple of kayak lengths away.  We also just sat in our kayaks with our eyes closed and listened to the sound of the air bubbles escaping from the bergs all around us. 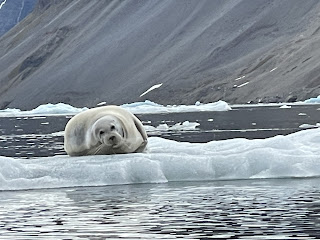 Returning to the ship, most guests hurried with their packing before the final briefing and crew farewell, as well as watching the video the ship produced for each guest.  The video is on Onedrive in the cloud, and we will have to wait until we return to download it.

The Seabourn Venture set sail for Longyearbyen where we will be alongside the pier for disembarkation and embarkation.  The 28 in-transit passengers will be going on a bus tour in the afternoon, staying out of the way of the new guests.  We will be masked up for everything once again since we have been in a relatively safe bubble for the last 10 days.

The tour was short, but the museum was worth the visit.  Since it was Sunday, the stores were closed until 3PM, so no shopping.  We drove by the entrance to the Svalbard Global Seed Bank, but were not allowed to approach.

The ship departed 1 ½ hours late due to lost luggage, but we finally left at 1830.  Our destination tomorrow is Gravenesodden, where we hope to see more wildlife.

By Trawlers on August 7, 2022 in The Pearl
“Coming back to where you started is not the same as never leaving.” -Terry Pratchett
Besides the trips we took to Clayton and Niagara on the Lake we spent a lot of time in July listening to music around the area. 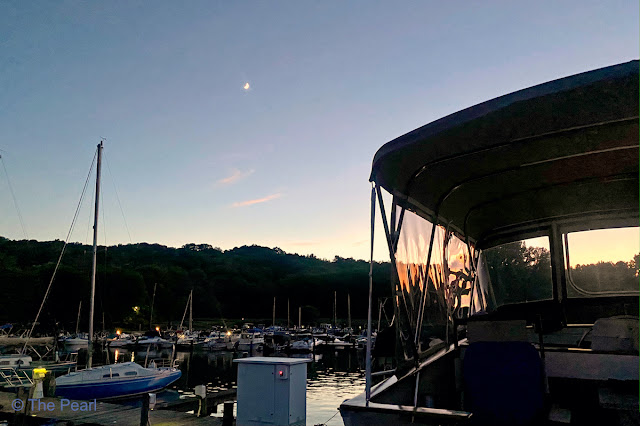 One place we seem to always go each year is Six Mile Creek Vineyard. It’s a small place, but the wine is good and the bands are always entertaining. We took a picnic dinner with us, bought a bottle of wine and enjoyed the music.CONTINUE READING HERE…»

We would like to stay longer at Khutze Bay, but we still have many miles to travel so must push on. Continuing south on the Princess Royal Channel, we enjoy a beautiful day with 70 degree temperatures and bright sunshine. Our anchorage for the next two days is Bottleneck Inlet. We rendezvous here with our […]

On Wednesday morning, Eric was woken up at 0400 by some noise. He went up to check to see if all was okay, and found that we were in the middle of a quite a bit of wind and the … Continue reading →