After a successful shakedown cruise, we headed back to Petersburg for a few days. A boating friend’s daughter is getting married this weekend. We take advantage of the time at the docks to also do some more provisioning for the summer. Our primary mode of transportation is walking. Luckily the grocery store and Post Office […]

It is a rare blue sky day for Alaska as we push away from our stall in Petersburg Harbor. We are heading out for a few days to a nearby anchorage. Since Idyll Time has been winterized for the past six months, we want to test all her systems aboard before we get too far […]

It is a cold blustery day as we walk down the steep ramp to the North Harbor. It was 80 degrees when we left home in Tennessee. Here in Petersburg the high is 40 degrees with snow still on the mountain peaks. It feels good to be back in Alaska. We both comment “It seems […]

Easter morning Bald Eagle Lake 2022.  Looks like a good day for us (although as I write this, the evening weather has taken a turn for the worse – snowing!!!!!)  Welcome to Minnesota spring. Thankyou Shana for hosting an amazing Easter …

OK, so the new toilet arrived in one piece and the old Dometic/Sealand VacuFlush toilet and lines have been removed.Sorry we missed pics of the removal. That was the ugly part as the original sanitary hose from the old toilet to the vacuum tank (…

Key West or Bust!!! also Roh Roh ! (and the rest of January)

By Trawlers on February 3, 2022 in Broulee
The first week of January found us back at our favorite anchorage at Keewaydin Island. We ended up spending 3 beautiful nights. 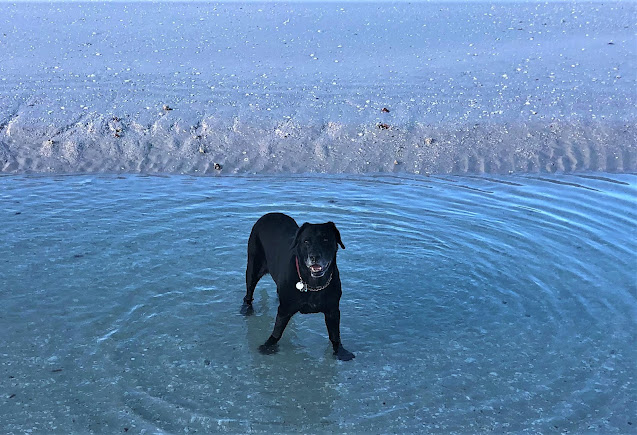 Izzy enjoyed lots of beach time – she is a labrador after all. 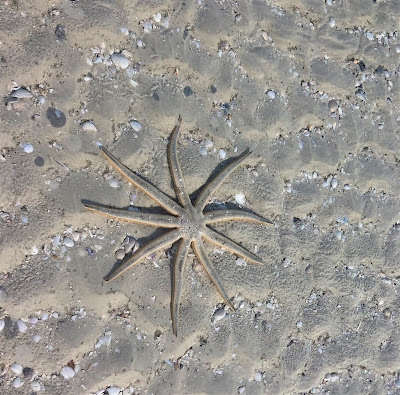 and, once again, we were escorted back to our marina by this fun group.  Check out the big guy doing his famous spin move.
Our original plan was to take Broulee to Key West and spend a month in a marina there.  We started back in late July early August to get a reservation for January or February, they would kinda  chuckle, then tell us they would  put us on a list. After listening to other boaters here experiencing the same “we will put you on a list” situation, we have all figured out it’s not going to happen.  So the second week in January we loaded Izzy in the car and drove the five hours and stayed in a pricey hotel.  Just letting you know, it is still Key West! However, this is all about visiting our friends Vince and Mary who locked into City Marina, well over two years ago. 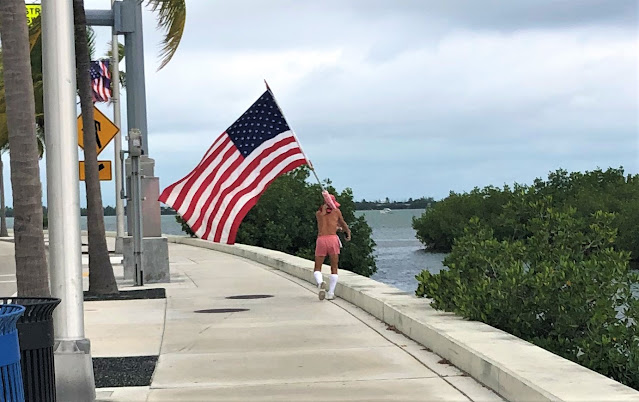 Out for a walk with Izzy the next morning, we had jackets on with winds blowing 10-20 miles an hour, this guy blew by us.  Found out later, he does this every day. 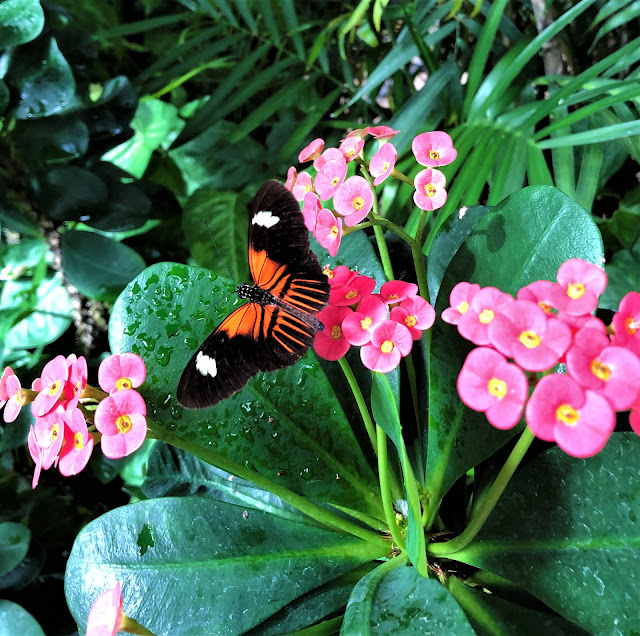 We’ve been to Key West a few times and have done the stuff,  so this was a fun find for us, The Key West Butterfly & Nature Conservatory.  They have 50-60 varieties of butterflies from around the world.  It was magical. 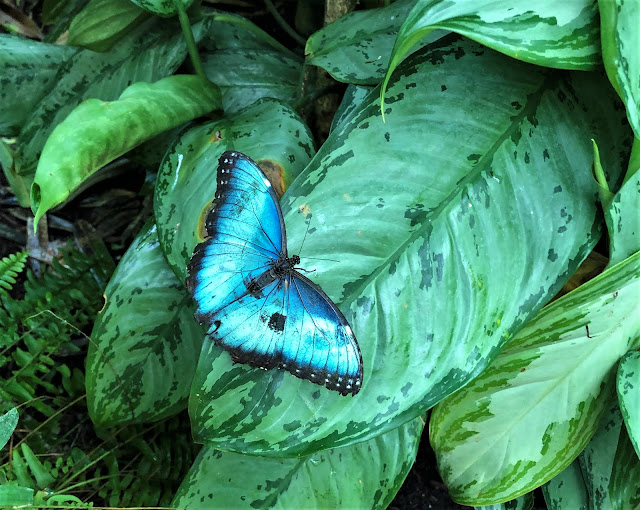 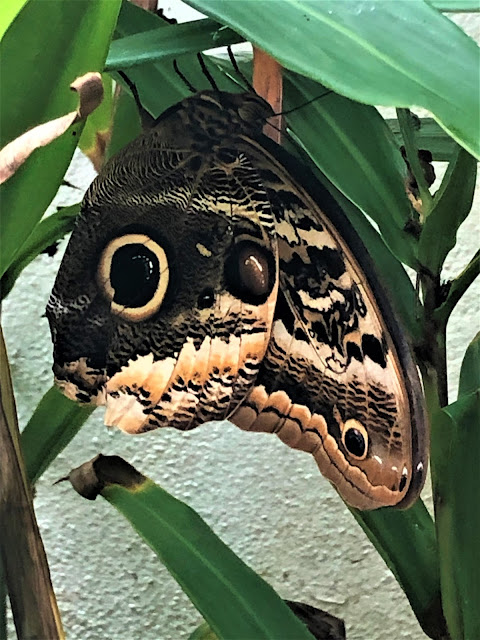 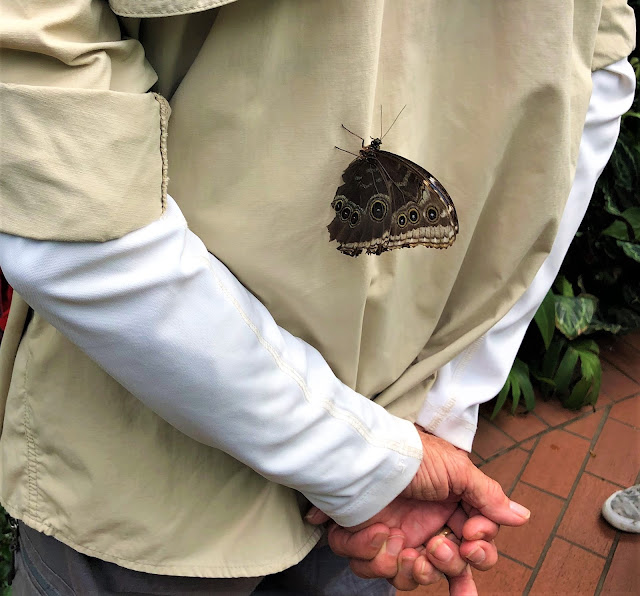 This guy/girl tried to hitchhike out of here with Rick 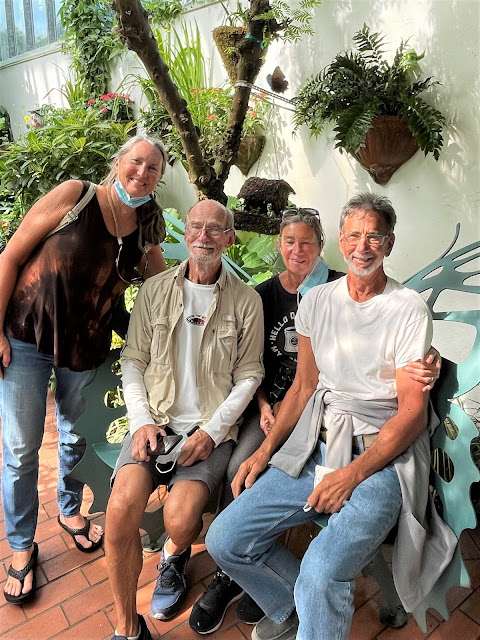 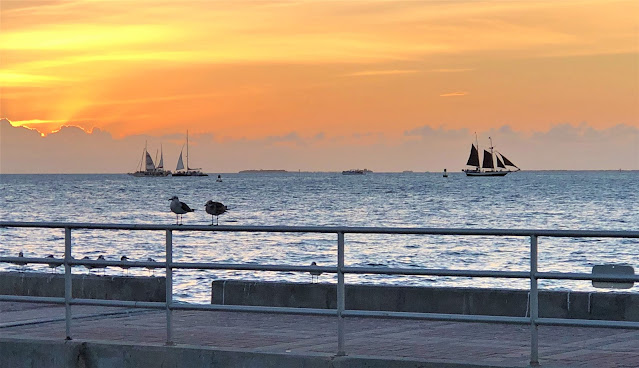 Our last night there, of course, we had to do Mallory Square and sunset. 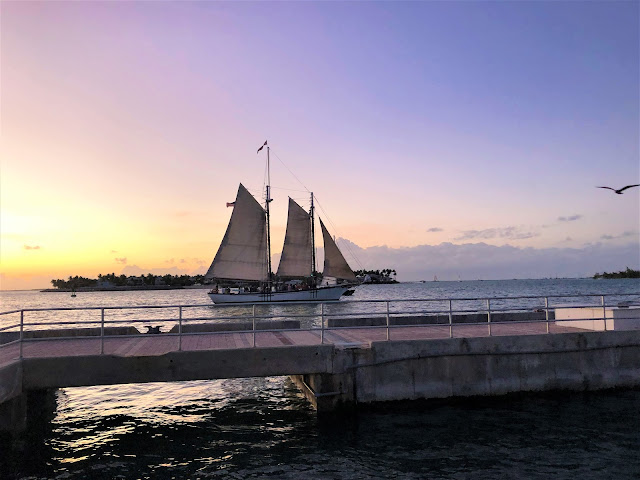 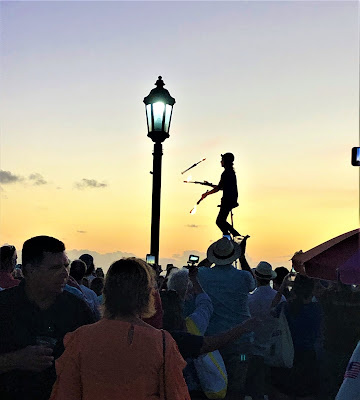 As always, too many people! 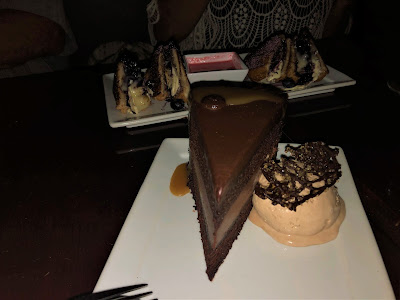 Had dessert and decadent drinks at a place called Better Than Sex, well it’s close! 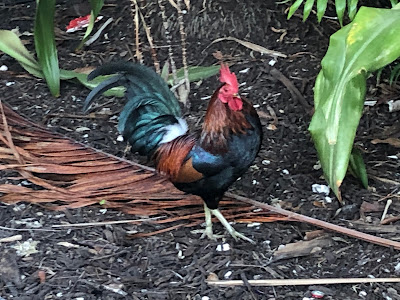 Sadly, these guys are taking over the island, and trust me hens and chicks don’t have a chance 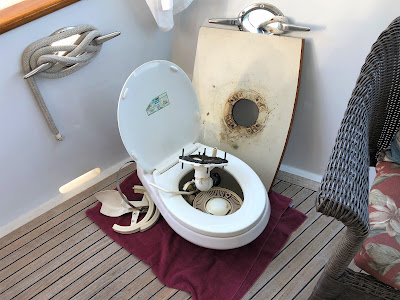 Rick, you asked, what projects Rick is working on.  I wish it was something fun, but sadly, our crapper took a crap.  She held in there for 28 years ( with some minor repairs) but, she had to go. 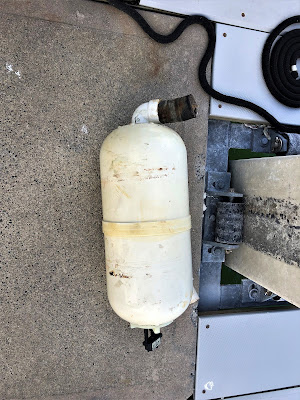 It wasn’t really the toilets fault, but this guy, also not the culprit, which was clogged with calcium deposits where the inch and a half sanitary hose connected to it, it was actually the hoses fault.  We just decided it was time to shit can this old system.  After research, decided to switch to a maserator toilet. 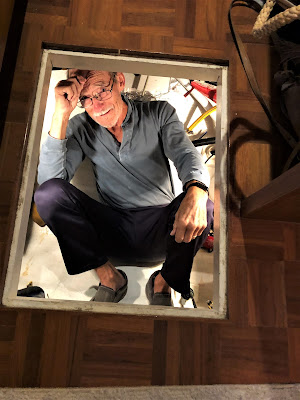 Of, course, any of you boaters know, the toilet and sewer system on the boat is probably the worst repair job that you ever have to deal with.  Rick down in the shit hole place. 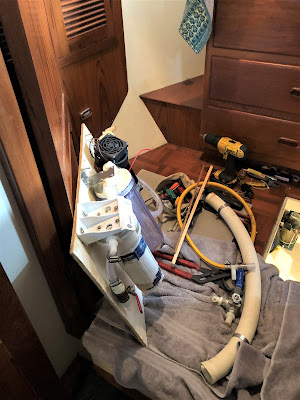 As always, projects mean the boat becomes a construction zone.  Yep, this is our bedroom, step carefully. 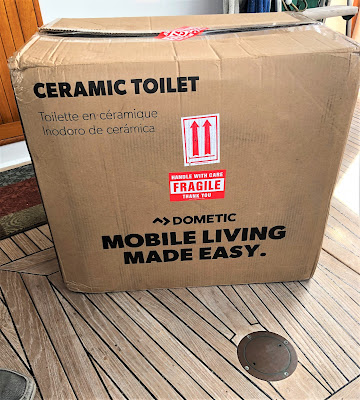 New toilet is here, so exciting – 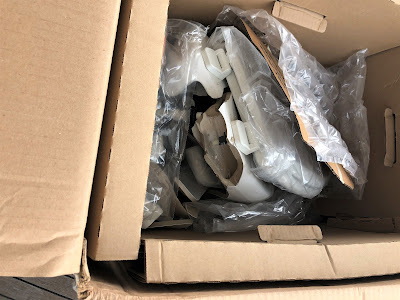 Unfortunately, it arrived in a hundred little pieces. 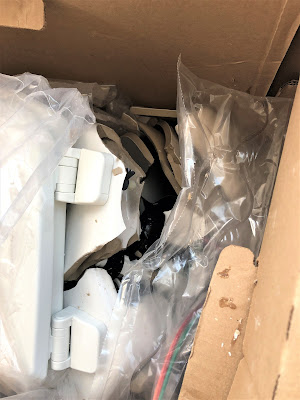 On a sad note, Debs brother-in-law who had been managing cancer for many years, was told in December he had 3-6 months to live (he found this out 4 days after he retired). Deb got the call on January 19th, that he had a seizure and was admitted to hospital.  She flew home the next day. Very lucky to be with him and we were able to say we  love you and that he needs to go to be with her sister Joni.  Upon arrival back in Florida on the evening of January 23rd, we got the call he passed hours after she left him. 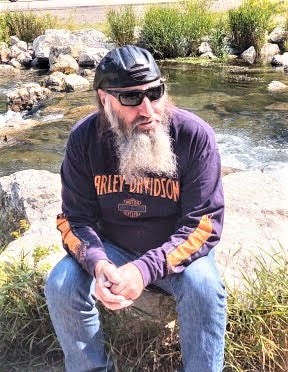 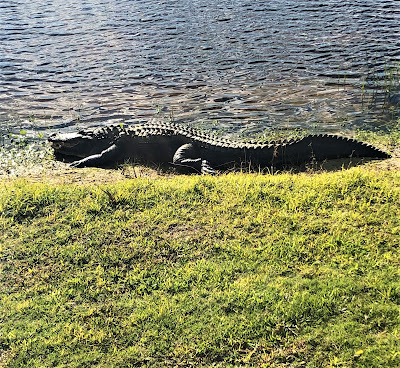 Rick has been golfing a lot. Guessing he will take a drop on this one? 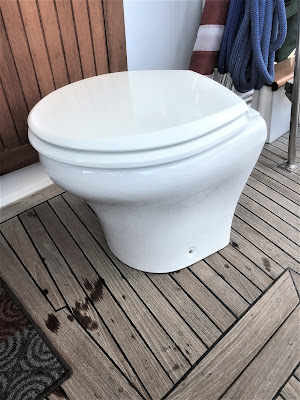 On a happy note, our new, all in one piece toilet arrived today.  She’s a beauty. I have never been so excited to see a toilet.  Rick will fill in all the details on this “fun” project.

Arriving November 5th at facility where Broulee has been stored since June of 2020.  Unfortunately we had to catch a flight home when we dropped her off so we didn’t get a chance to see her bottom.  Looks like we have a bottom paint job in ou…

Kind of left some of you hanging June of 2020.  After storing the boat in Florida, we were back in MN and Rick continued to have gut pain, seemed like we were in the ER every other week  It took till mid July 2020, after another biopsy …

Hey, we are back on  Broulee and couldn’t be happier.  It’s been a year and a half (due to reasons beyond our control), more on that to follow.  Wishing Everyone a Happy New Year and hoping for an amazing 2022, well at least a good 2022….