A few year back, we picked up a FLIR ONE Thermal Camera from Amazon. It’s only $200 and operates as an extension to an Android phone (IOS also supported on similar hardware) with an on-phone application. Every 6 months we use the camera to do a full scan of the breaker cabinet, the DC cabinet,…

Downtown Seattle is full of apartment buildings overlooking Elliott Bay, with frequent ferry and commercial traffic. If a distress flare were fired in this area, you would expect this to generate a lot of reports. But when one was set off on a recent Tuesday morning, we might have been the only ones to report…

Although 2020 was a year of big and unexpected plan changes, for us, 2021 brought even more. We started the year living on our boat in Norway and ended it living in our apartment in Seattle. In between, we travelled 4,933 nautical miles across the North Sea, the Irish Sea and the Atlantic Ocean to…

We got a little bit Norway in Seattle this holiday season as an unusual winter storm dumped several inches of snow Boxing Day morning. We’d had a few flurries yesterday and, with a big winter storm in the forecast, were expecting to wake up to snow this morning. At 5am we were disappointed to find…

Although we loved the warm weather in the South Pacific, we find ourselves drawn more to higher latitudes. Of the twenty years we’ve cruised in our Nordhavn 52 and our previous boat, most of that time has been spent in places where the summers are warm, but not hot, and the winters can be quite…

It’s been great to get cruising again and with summer now underway this can only get better.

It’s now official that La Nina weather conditions are expected this summer, bringing warmer than average sea and air temperatures (the seatemperature off Kawau is already 20.5d). The downside is La Nina also brings NE winds, increased rain and potentially some cyclonic conditions with the probability of increased thunderstorms. Thesecan be problematic due to sudden and sometimes severe wind direction shifts, so anchor with care to allow for this.

We’ve done two week-long cruises recently, one to the Ponui area and one to Mahurangi and Kawau. 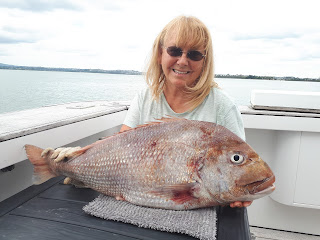 You can’t always get what you want

We’ve owned our 16 metreSalthouseSportFisher, Rapport, for two yearsnowand after 177nights aboard find her a capable and comfortable cruiser. But when you buy a pre-owned boat you inevitably make some compromises and a major one for us was not having a large RHIB. We really enjoy exploring areas around our anchorage and ideally wanted a RHIB at least three metres longwith a 15hp 4-stroke outboard and able to be lifted aboard usinga crane. Rapport came without a crane andwith an old Chinese built Takacatinflatable that we rubbished after a few weeks as it had toomany pontoon air leaks to be economically repaired. In any case we didn’t like the Takacat’s inflatable floor limiting movement in the RHIB.

It was December and we urgently needed a dinghy that two of us could easily lift onto ourforedeck cradle, sobought a new lightweight (33kg) Aquapro SLR 2.6m rigid-hulled inflatable andHonda 2.5hp 4-strokeair cooled outboard. We usedthe same outboard during our Med cruising years and found it very reliable and easy to start and lift.But for Rapport this was always a temporary solution and so aided by our best friend and long time boating companion, Frank, we started researching deck cranesand larger inflatables.

We knew this was going to be an expensive project and that making improvements to a boat doesn’t necessarily add value. Atrusted marine broker’s thoughts were that future potential buyers of Rapport would expect a vessel of this size to carry a substantial RHIB and crane, so adding these would increase her sales appeal and value. We didn’t need too much convincing and reassured byhis advice and the prospect of lots morefun ahead decided to proceed.

It would be possible to lift the new outboard fromthe RHIB using a simple transom-mounted hand-operated winch, unload the other gear and then pull the empty RHIB onto the foredeck by hand, but we’re getting a bit long in the tooth for that and want to be able to launch and retrievethe whole rigwith minimal effort.

The RHIB with its outboard, fuel and gear willweigh about 150kg so we need a24V DC powered crane with a safe working load of at least that. We find plenty of options for large cranes but few for smaller units.

Motor Yacht Services (MYS) are theNew Zealandagent for Brisbane-based Australian Davits and Cranes (ADC)and we find them very helpfulhaving fitted many ADCs with good results. MYS’s owner Dean Ryder checks Rapport and quotes $13,973 plus installation for their 350kgcapacity crane mounted on our starboard side with its standpipe passing through our master berth’s wardrobe down to the keel to support the load. Delivery was quoted as 8 weeks ex factory.

Oceanlift cranes are produced on a bespoke basis in Rotoruaand we find owner Mark Thomson also provides lots of information. Coincidentally the boat owner next to us in the marina is very happy with hisOceanlift. Mark visits Rapport andquotes $13,711 plus installation for his200kg capacitycrane with 6 weeks delivery.

Both units will suit us however the ADC’sadditional capacity will provide an extra safety margin, more future flexibility and enhancedresale value. These factorscombined with the fact that MYS install their ADC craneswhereas we need a separatecontractor to installthe Oceanlift lead us to choose ADC. We expect the installation to take around three days and to costto around $6-8,000.

Which RHIB will suit us best?

We’re looking for a rugged rigid-hulled RHIB about 3 metresin length with room for four adults,able to plane with at least two adults aboard using a 15hp outboard, with generous beam for lateral stability, a snub rather than pointed bow for greater internal space forward, a false flat deck for easier internal movement and to keep contents dry, a high bow to deflect spray, robust pontoons with three separate air compartments, paddles rather than oars and rowlocks,internal lifting points, rubbing strakes, storage for anchor and accessories and handles on the pontoons and bow. We’ll also fit top-of-the-line Beachmaster pneumatic wheels and two rod holders. We have a preference for a powder coatedalloy hull (being lighter and easier to repair), but will accept GRP all other things being equal.

We eliminate centre console optionsas in our view theytake up too much room in a 3 metre RHIB and add too much weight, complexity and expense.

I’ve had good experiences with Aquapro and Frank has with Quicksilver, so we make a short list including these plus Southern Pacific and Zodiac. Initially we weren’t aware ofAB and Seafarer and later add these to our list. All sellers we speakto are able to provide a complete package including outboard and are willing to negotiate deals.

Frank and I discuss design with Neil at Seafarer 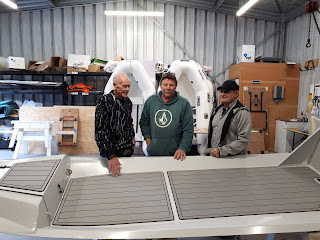 In each case these materials are used to coat a polyester or polyamide (commonly known as nylon) fabric.Although there’s lotsof debate about the pros and cons of each material due to different product qualities and variations in design, manufacture and quality control,the above list represents anascending order of technical excellence. Manufacture and quality control are vitally important andwe’re aware of two successful New Zealand brands that encountered major problems when they switched production to China, eventually reverting to New Zealand manufacture.

Until recently the Neoprene/Hypalon blend was considered the gold standard, but opinion has largelyturnedtowards TPU taking that spot, in fact the US Navy conducted a study of pontoons in 2001 concluding “tubes constructed of TPU exhibit better key physical properties than tubes constructed of Hypalon … better tensile strength, tearing strength, puncture resistance and abrasion resistance.” It also has superior air retention, chemical (ie fuel) resistance and seams can be welded whereas Hypalon can only be glued.

Despite the above Frank and I have both experienced good results previouslywithRHIBs havingpvc pontoons and their life can be maximised by always using a storage cover and fitting chaps to provide the pontoons with extra ultra violet, abrasion and puncture resistance.

We’d been inclined towards Zodiac, their brand being synonymous with RHIBs, butthey only offered us RHIBs builtin Indonesia with GRP hulls and pvc pontoons and availability appeared to be an issue. Of the imported brands we’remost impressed by AB, produced in Belgium with an alloy hull and using a Neoprene/Hypalon blend for tubes. However wantinga few custom features addedwevisit local producer Seafarer Inflatables, based in Dairyflat north of Auckland where we’reimmediately impressed by owner Neil Curtling’senthusiasm and willingness to share his extensive knowledge based on 35 years in the industry. Seafareruse a unique hot air welding process and their productincorporatesall of the features we’re looking for and more, such as U-Deck providing a great cosmetic appearance and underfoot feel. They also produce for another well-known brand as well as repairingall types of inflatables and can produce pontoons using either a PVC/TPU blend, Hypalon or TPU. We’re also impressed by their 10 year warranty. Afterdiscussions with Neil wedecide to go a little larger than 3 metresand buy their SF340R, 3.4 metreslong with a generous beam of 1.8 metres. Although wewould have been happy with pontoons made from PVC/TPU we decide to go with the top of the line TPU, largely because this is the ultimate in durability and our RHIB is our life boatin a worst case scenario. This costs an additional $755 bringingthe price to $6,992. Neil’s attention to detail continues to impress, for example suggesting that he drill the mounting holes for wheels and rod holders in the alloy hull prior to its powder coating to minimise future corrosion.

In the decade we spent travelling the world in Dirona, we typically returned to Seattle two-three times a year. And on every one of those trips (when international), we brought back a lot of boat parts and spares in checked luggage. The gear usually weighed at least 200 lbs (90kg) in aggregate, and sometimes as…

Exercising on a Boat

After a decade of living aboard, one of the few aspects of our cruising lifestyle that we weren’t satisfied with, and hadn’t found a good solution for, was exercise. A few years ago, we tried Mark Lauren’s You Are Your Own Gym bodyweight program and it’s worked out very well for us. We enjoy the…

It’s been several years since we’ve lived somewhere that we can catch major league sporting events, and it’s one of several aspects of living in Seattle that we’re really enjoying. The fall brought the return of two of our favorite sports, football and ice hockey. We watched several live Seattle Seahawks NFL games, and also…