It somehow seems fitting that we honor the one member of our canine crew that lived his whole life in the spotlight of TakingPaws with his own memorial blog post. I know we stopped the blog in the spring but this one is for us as a way to honor him.Dyl…

Life is a series of chapters. We have certainly had many; small and large, conventional and offbeat. But through it all there has been one constant, our dogs. Our life has been filled with 6 wonderful, loving, funny, happy dogs. Each one has a unique personality which brings depth and joy to our life.

We have loved chronicling our life of dogs. We have tens of thousands of pictures of them and a few of us. They started with film and moved on with new technologies.

The TakingPaws blog’s first entry was August 27, 2008 with our crew of Dyna and her grandson Dylan. Dyna crossed the rainbow bridge in 2013 and Dylan is a now himself a senior citizen. Our canine crew has ridden the “blog era” to fame, becoming far more recognizable than their mom and dad. We have loved blogging about the crew’s adventures and have met so many great people along the way.

The Red Head crew has now begun a new chapter. Dylan, Dee Dee, and Dora became the new owners of a beautiful home in Key West. Along with their staff of two (better known as mom and dad) they will be spending the fall and winter lounging by their pool and wandering the streets of this funky town. That doesn’t mean they have forsaken Red Head. She will continue to be their home as they travel north for the summer. So you can see they continue to live the hard life.

All of these changes have led to a hard decision. This will be the Red Head crew’s final TakingPaws entry. It has been a wild and wonderful ride but it is time to move on.

As many have noted, the crew has been rather sporadic during this past year+ of COVID, so we will leave you with a digital collage of the past few months. Dylan, Dee Dee, and Dora hope everyone remains well as we emerge from this unusual time and they thank you for your many years of support and kindness. You can still keep an eye out for them on the waterways.

The crew settled well into life at Titusville to wait out the pandemic. They played during the day. And cuddled at night. Meanwhile, mom and dad found themselves browsing Zillow. 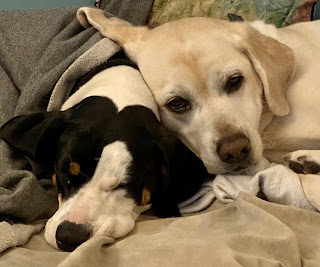 In late February, the crew piled into a rental car to help with the inspection of a Key West house. Dora thought it was perfect. 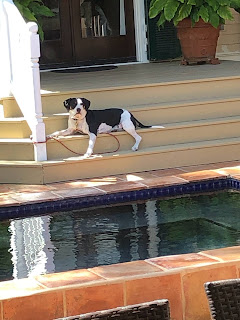 It was a very long day but the crew did great. They signed on the dotted line. 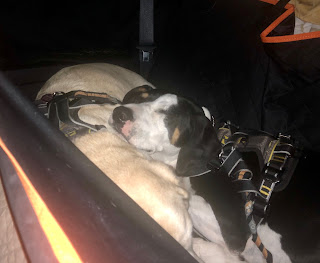 Red Head was moved north, out of the hurricane zone, where she awaits the crew’s return.

After stuffing a rental van to the gills, the crew took off for their new home. It was close but there was room for Dee Dee and Dora on the two bucket seats, while Dylan lounged in his bed on the floor. 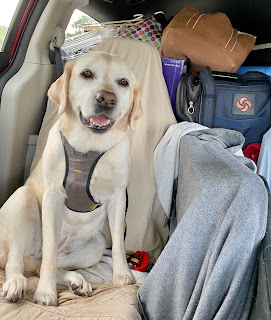 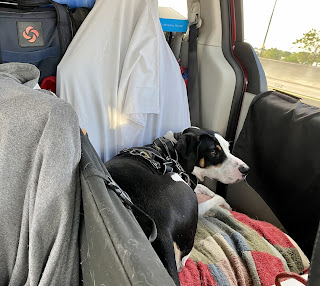 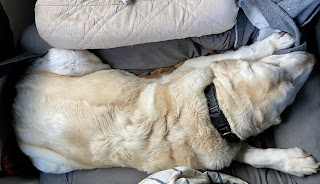 Dee Dee immediately discovered the pool. She would stay there 24/7 if she could. 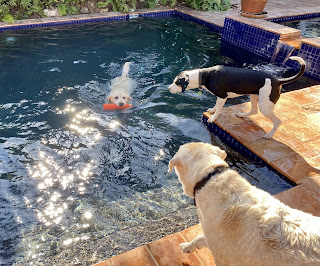 Dora explored every nook and cranny. 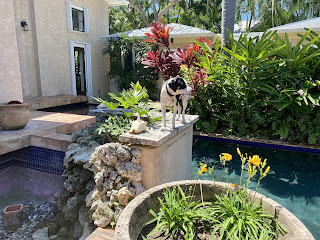 Dylan hung around the pool remembering his glory days. 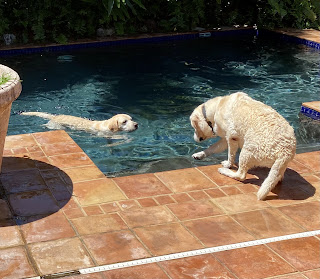 They seem to like it here and are doing very well settling in. 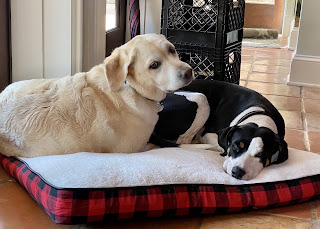 Dora discovers the sunny spot. She dislikes the pool. What a princess. 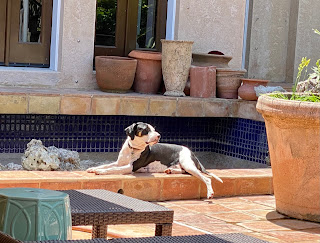 But it all leads to a quiet evening. 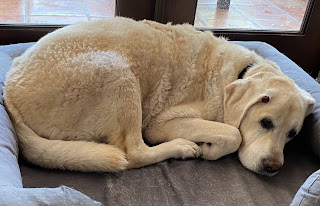 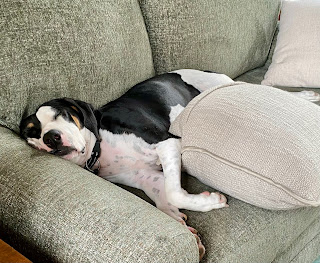 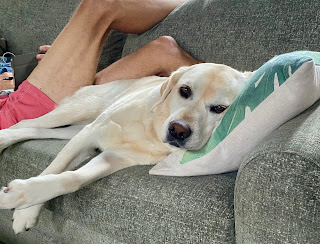 After many weeks getting the house together and the successful completion of mom and dad’s COVID vaccine, the crew had their first houseguests, Aunt Kristin and Uncle Wayne!!! Everybody had fun. They are now greatly missed. 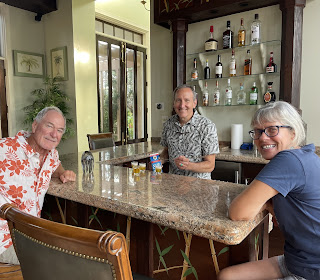 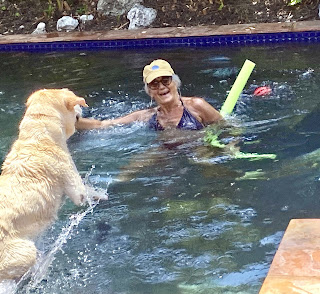 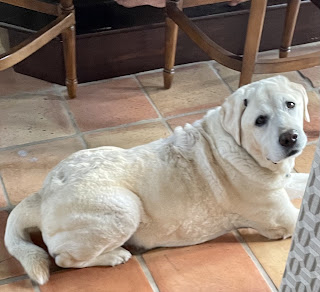 In a few weeks the crew will head back to Red Head but there’s still plenty of time to play and relax in their new home. 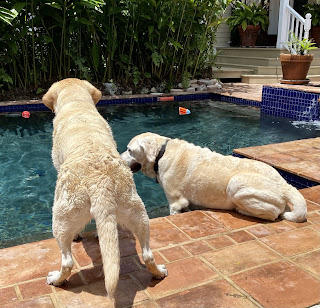 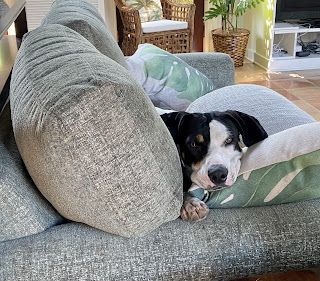 Peace and happiness. It’s been a hell of a ride.

By Trawlers on February 2, 2021 in aCappella

Dylan has fun at the dog park too. He’s very busy. And what a cute little bottom he has. Love you big boy 😘

Runs With The Big Dogs

It doesn’t matter what the scale says. In Dora’s mind, she’s as big as any of them….

Watch for a glimpse of Dylan on the right.

The Kids Are Alright 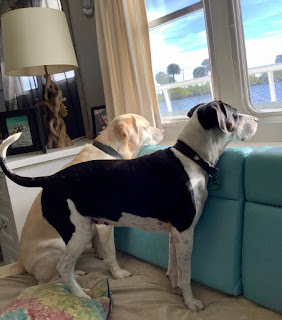 The Red Head crew has liked hunkering down while the pandemic hopefully passes by. Dylan, Dee Dee, and Dora love having nearly 24/7 access to Mom and Dad. Their days are pretty predictable. The morning is all about the kids with Mom taking Dee Dee for a long walk in the adjacent park. While Dad takes Dylan and Dora, where else…

To the dog park! Dora loves it. Even our decidedly senior citizen Dylan gets in on some of the action.

After the kids are throughly tired from their morning adventures, Mom and Dad can spend some of the afternoon working on their Boat Projects list. Currently they’re repairing and painting interior walls.

We hope that 2021 will bring us all back together again. Please stay healthy and wear your mask – it’s really no big deal 😷. 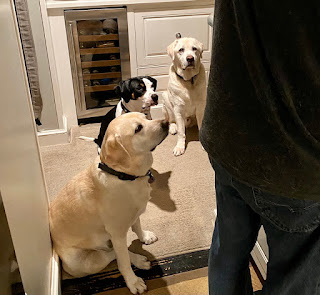 This morning Mom finished a jar and asked Dad to combine the new jar of natural peanut butter. The crew took notice. They’re hoping he’ll give them another dollop. Pretty sure they won’t be disappointed…😉

We’ve had quite a few people asking why the crew hasn’t posted a blog entry in weeks. There’s not much happening. The days have been much of the same with the main excitement being when Mom and Dad bring in a pizza. 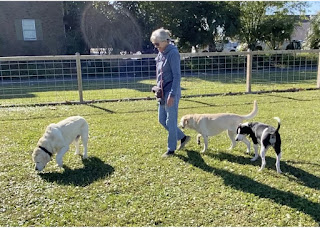 Like every stop, the crew finds a routine. Brunswick Landing Marina has a new dog park and we’ve been going nearly every morning.

On the down side, there is rarely more than the Red Head crew there. Dora loves lots of dog. But on the upside, it means Dee Dee gets to romp. (More on Dee Dee in a future post.) The two girls have developed a good playing relationship, finally, which has led to some cute play sessions on the boat as well.

Everyone is doing fine. We hope to move south soon. The crew is looking forward to the next stop which has another terrific dog park. Why else did Mom and Dad pick it… 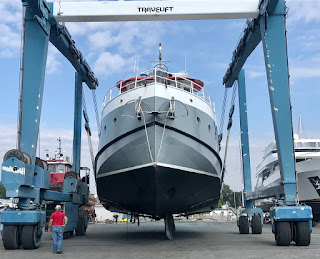 RED HEAD finally is back in the water and the whole crew couldn’t be happier.  It was a trying time for Mom and Dad, while Dylan, Dee Dee, and Dora did just fine. Mom found a nice long walk that she and Dee Dee took each morning.

Dylan and Dora still made it to the dog park every morning. What fun!

Dylan has been on a new regimen of CBD oil and it seems to have put a spring in his step.

Alas, the dog park is now just a memory but we’re pretty sure we know what Dora dreams about. 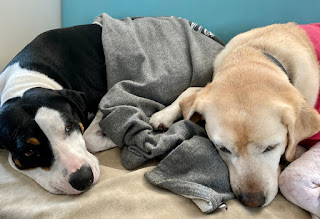