Camouflage in the Underwater World – By Emily

By Trawlers on April 11, 2014 in Emily Grace
Gaze at a reef and you’ll see a vivid habitat- tan fire coral, purple gorgonians, red lacy-looking lionfish, and millions of other colors and corals. But what is more interesting is what you can’t see… and what’s in clear view telling you “don’t touch me”. In reefs all animals drape themselves in color or camouflage to entice mates, catch prey, or even hide in plain sight.

There are many types of camouflage, many of which we have seen in our travels. The most common is coloring that resembles surroundings. Many wrasses and parrotfish are blue or brown to mimic the color of the water or coral. Most young parrotfish look a lot like coral, so that when they move it seems like the coral has come to life. The most amazing example is the frogfish, a creature even I have not seen, but still hope to. One that we have seen is the devil scorpion fish.

We spent about 5 days in Georgetown.  We never found a lot of Kid boats but it had not changed much since 2009.  They still had an active VHF radio net each morning and plenty of organized activities.  Tom took advantage of the VHF net to advertise to the 300 cruising boats anchored here and unload some used items.  We sold our old back-up dingy, 2 HP outboard motor and all of our paper Caribbean charts to 3 different cruisers.  Here is a pic of our old dingy being towed away…it had no patches but it was almost 10 years old. 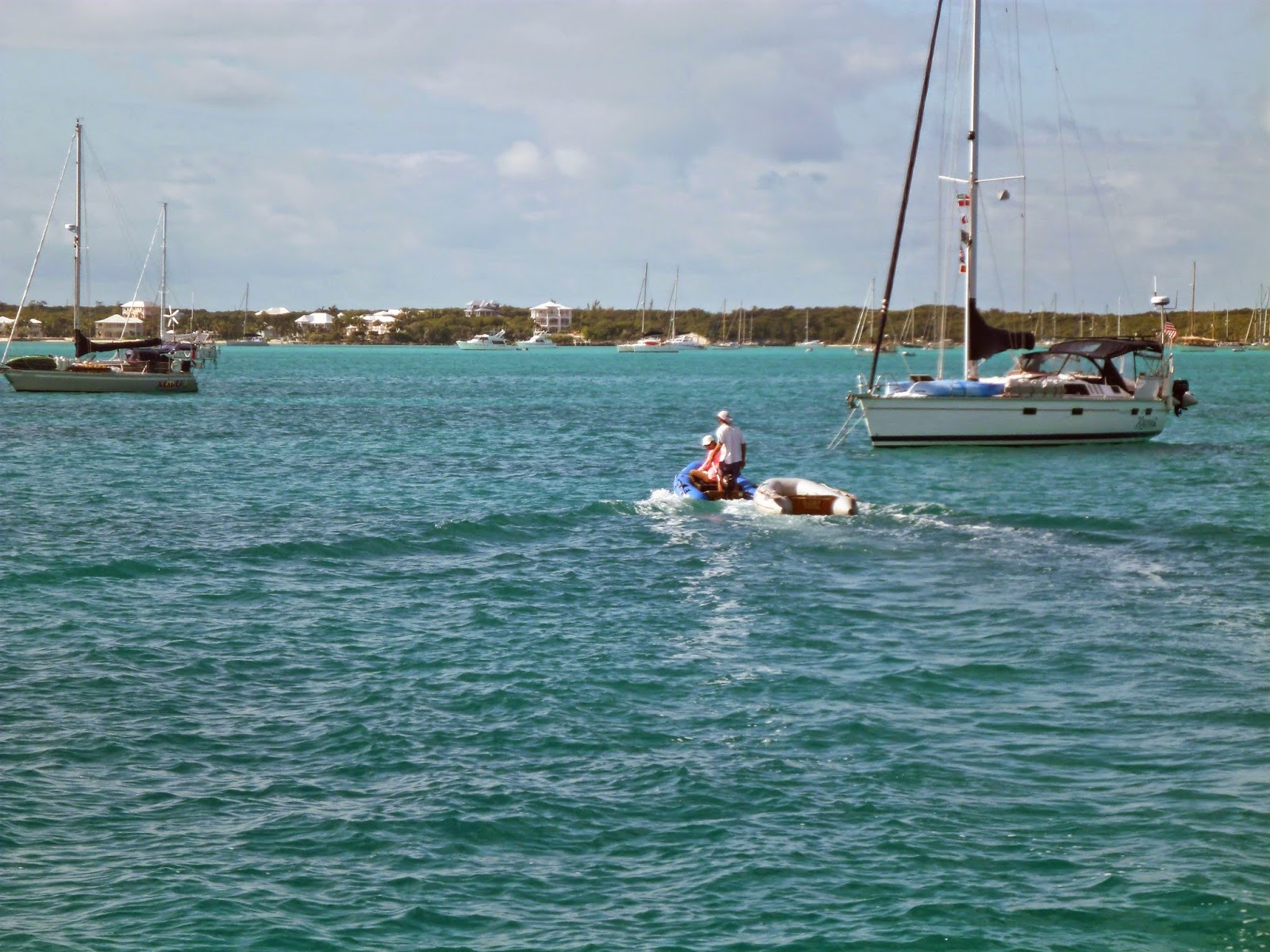 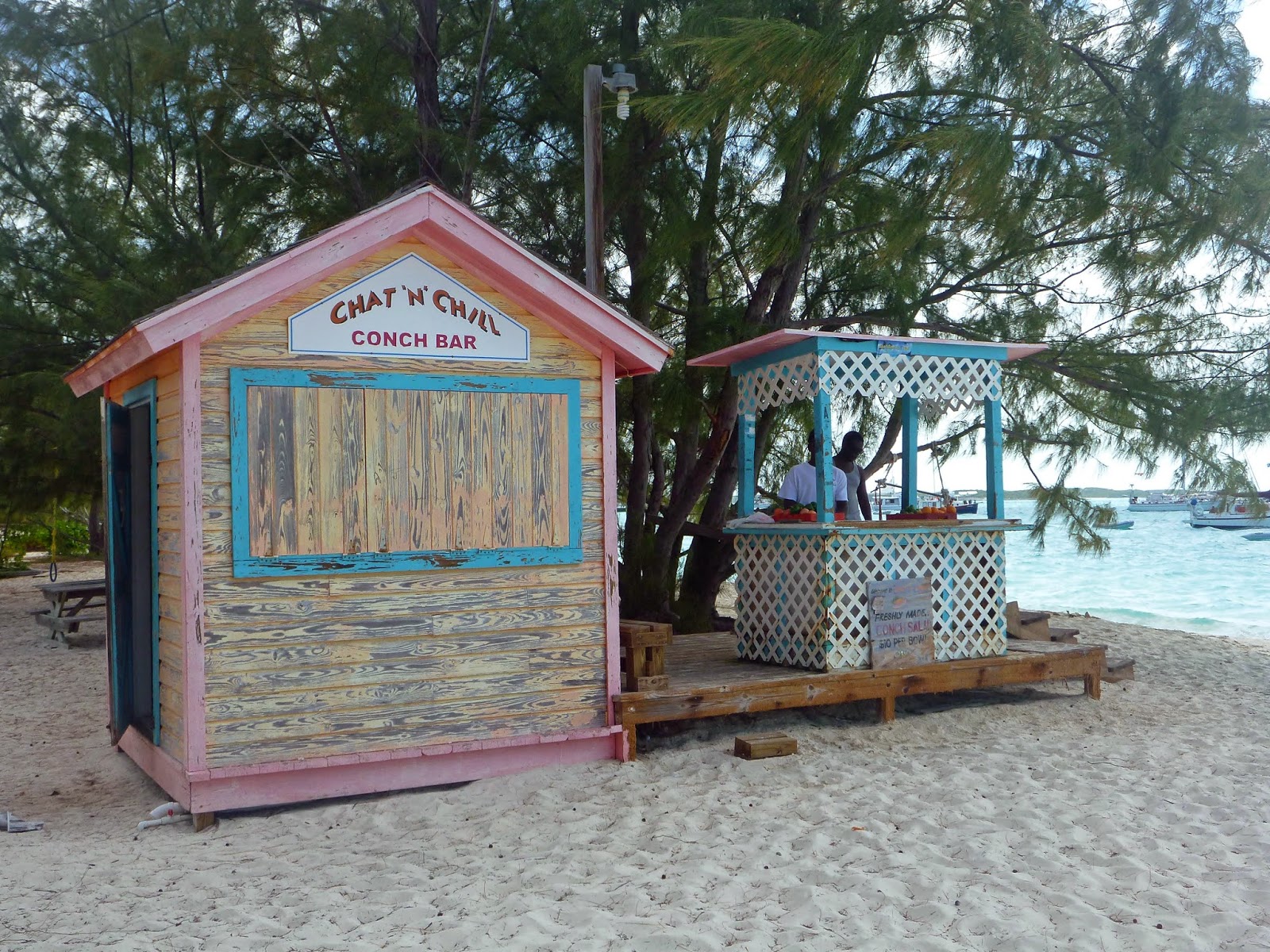 We also found the Chat ‘n Chill conch bar was still there and we ordered up 3 salads for a beach snack.  We watched them bring 3 conchs up from the beach, open and clean them and then chop them up (raw) finely with fresh onions, peppers, tomatoes and they drowned it all in lime and orange juice.  I even had them add a little diced habanero hot pepper to mine for some extra zip! 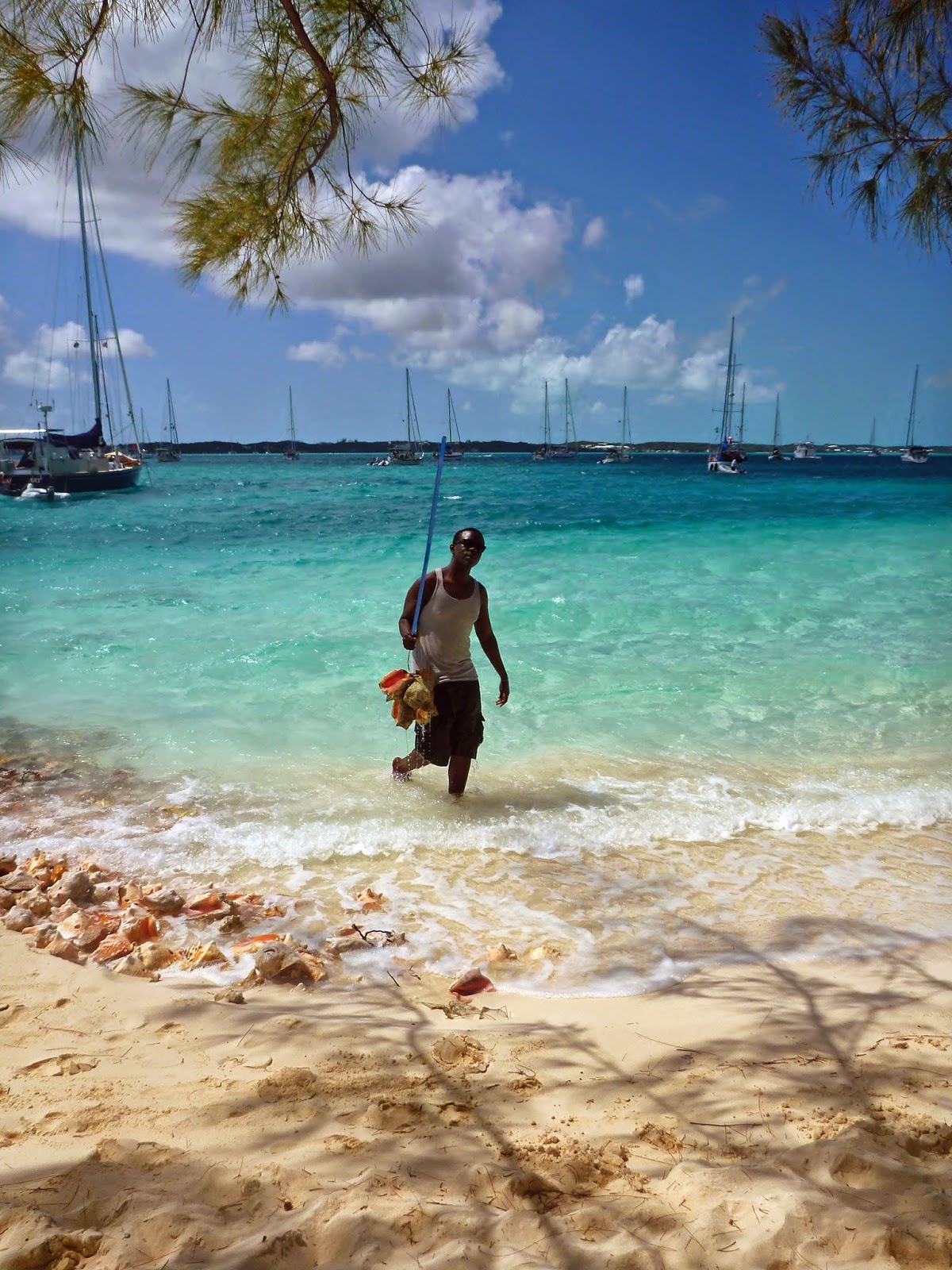 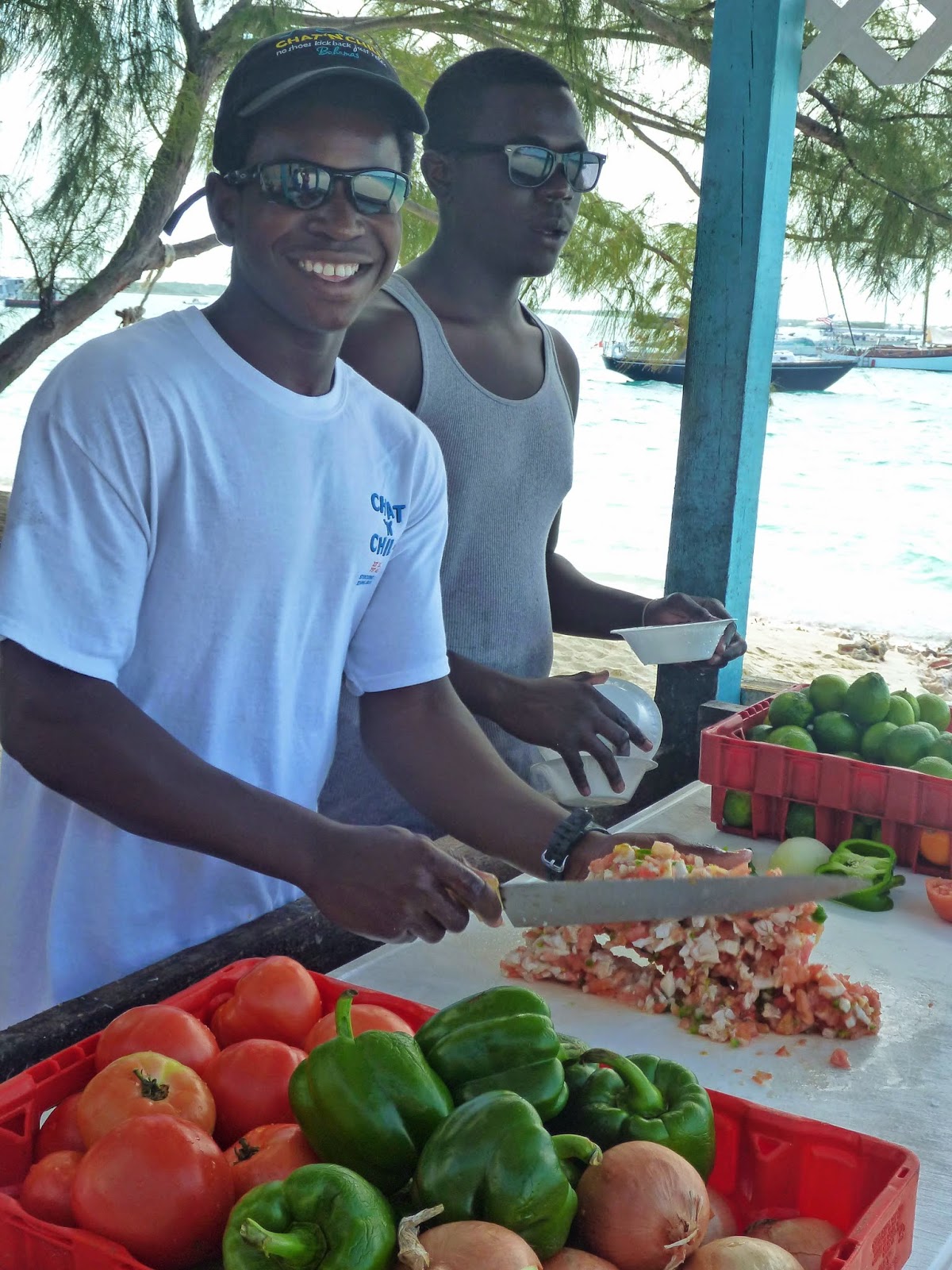 Man, was that good.  Emily enjoyed petting the tame sting rays that were also enjoying the conch discards. 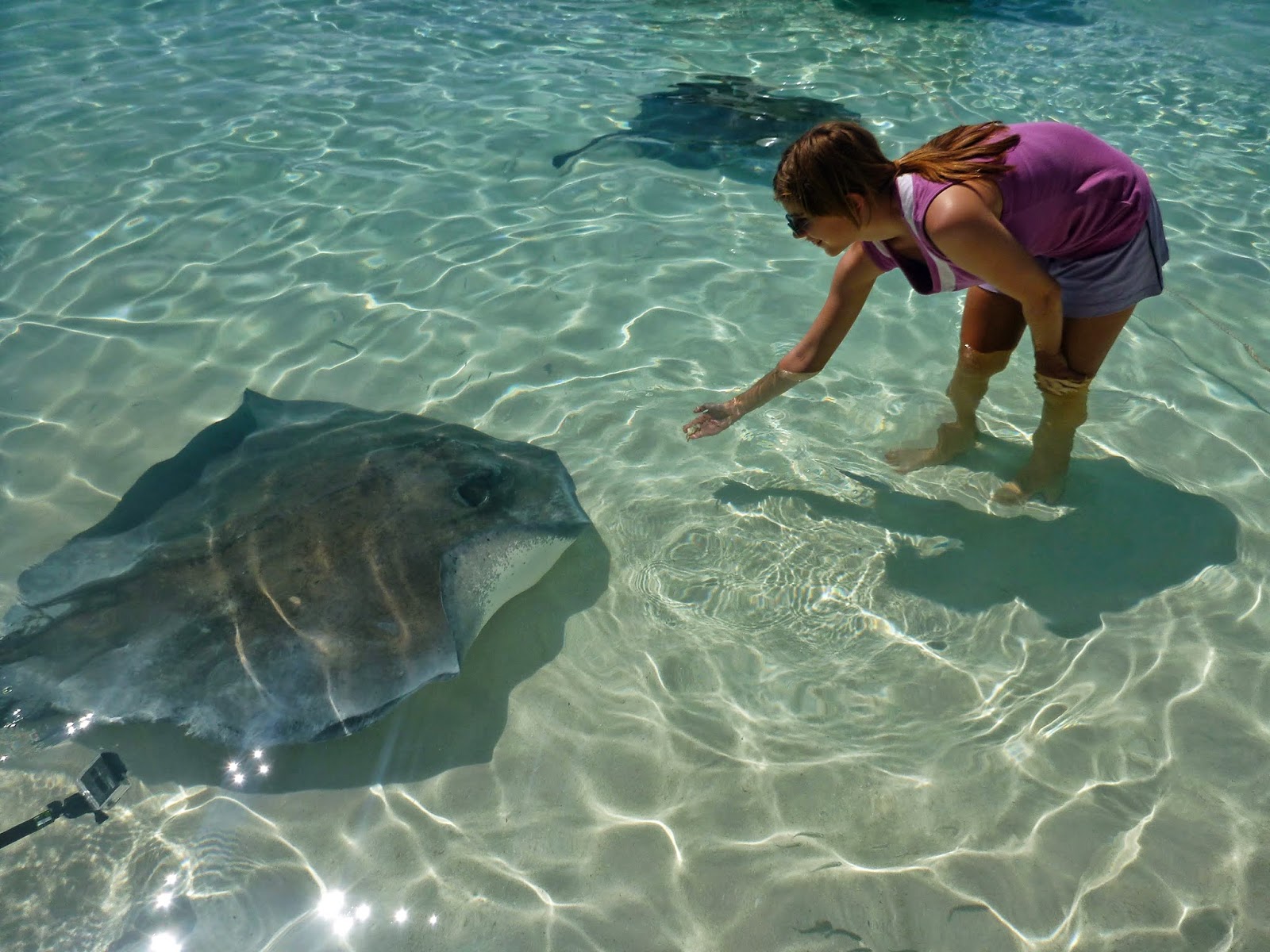 From Georgetown we moved northwest to Rudder Cut Cay where we took shelter from the wind that would clock from southeast to west to north within 24 to 36 hours before returning to the normal easterly direction.  This happened each time a cold front went through which was happening about every 5 days.  We had to plan our moves to enjoy the south wind while moving north but find good shelter from the clocking winds after arrival.  Because of the limited anchorages giving shelter from the west winds and the sheer number of cruising boats, it was a challenge to find room. 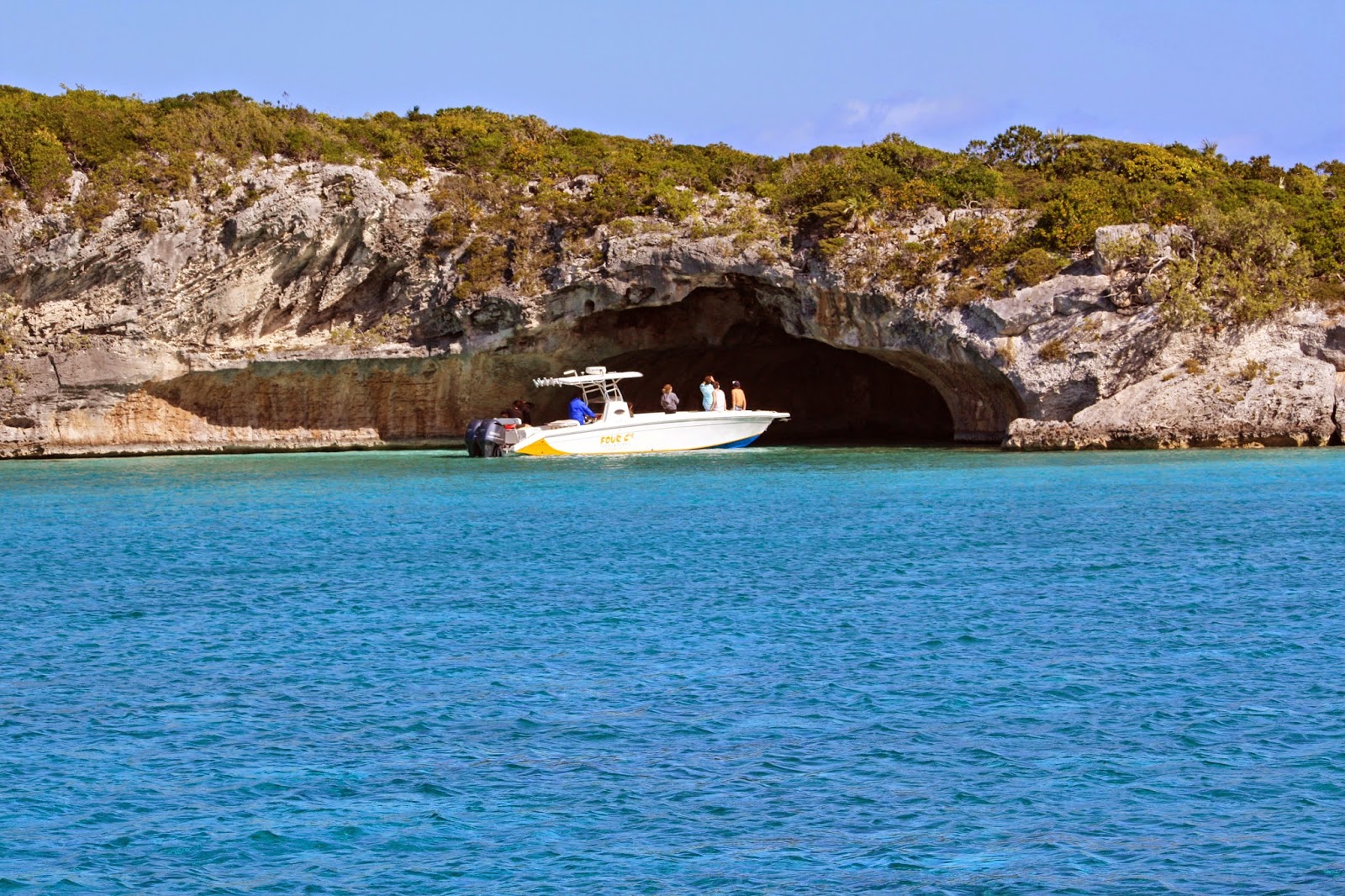 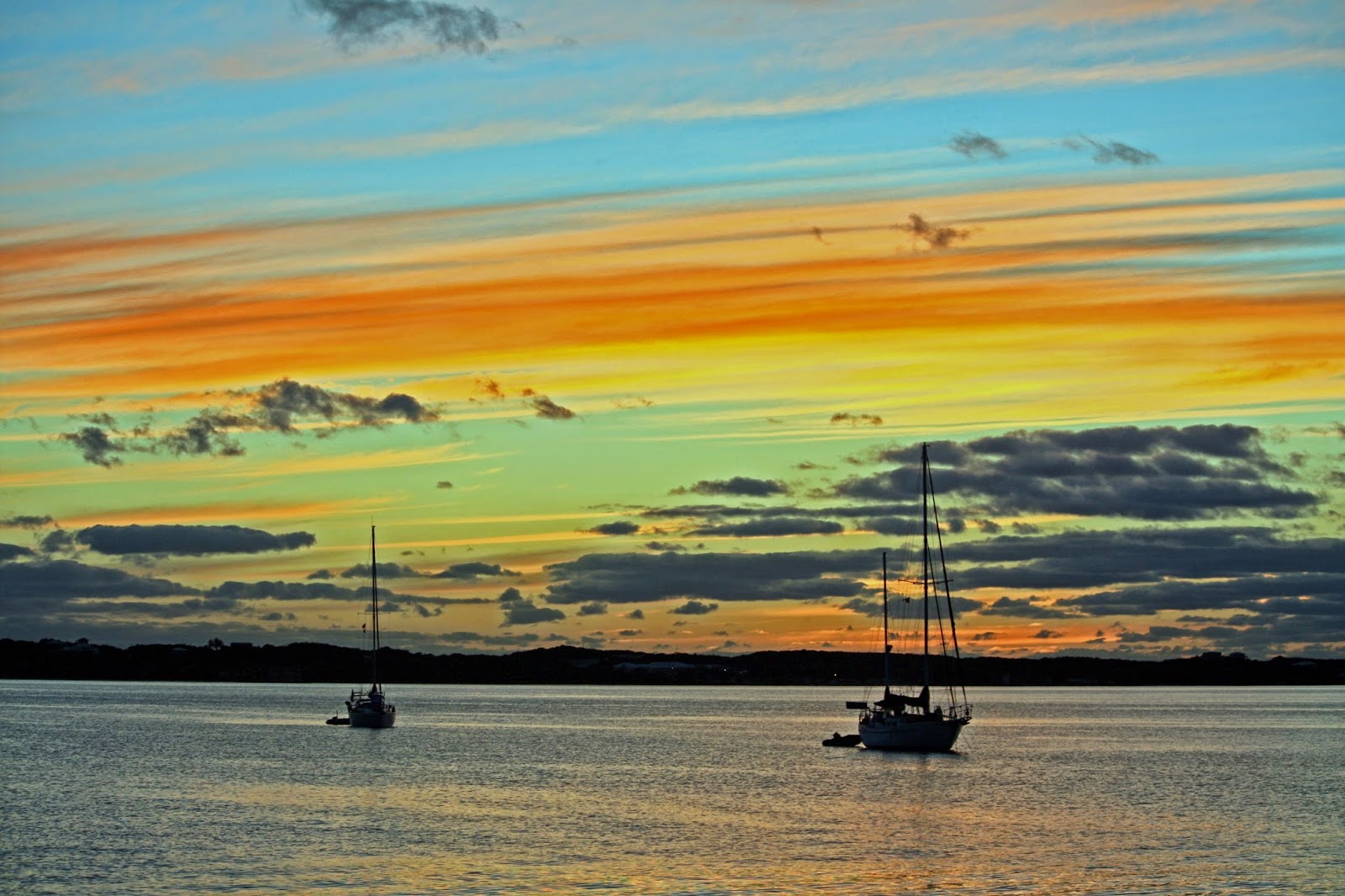 We saw 3 good sized boats driven hard aground on reefs.  This fellow tried to anchor near me but was convinced (by me) that there was not enough room and anchored elsewhere.  The next morning, he was hard on a reef and was pulled off by the blue salvage vessel. 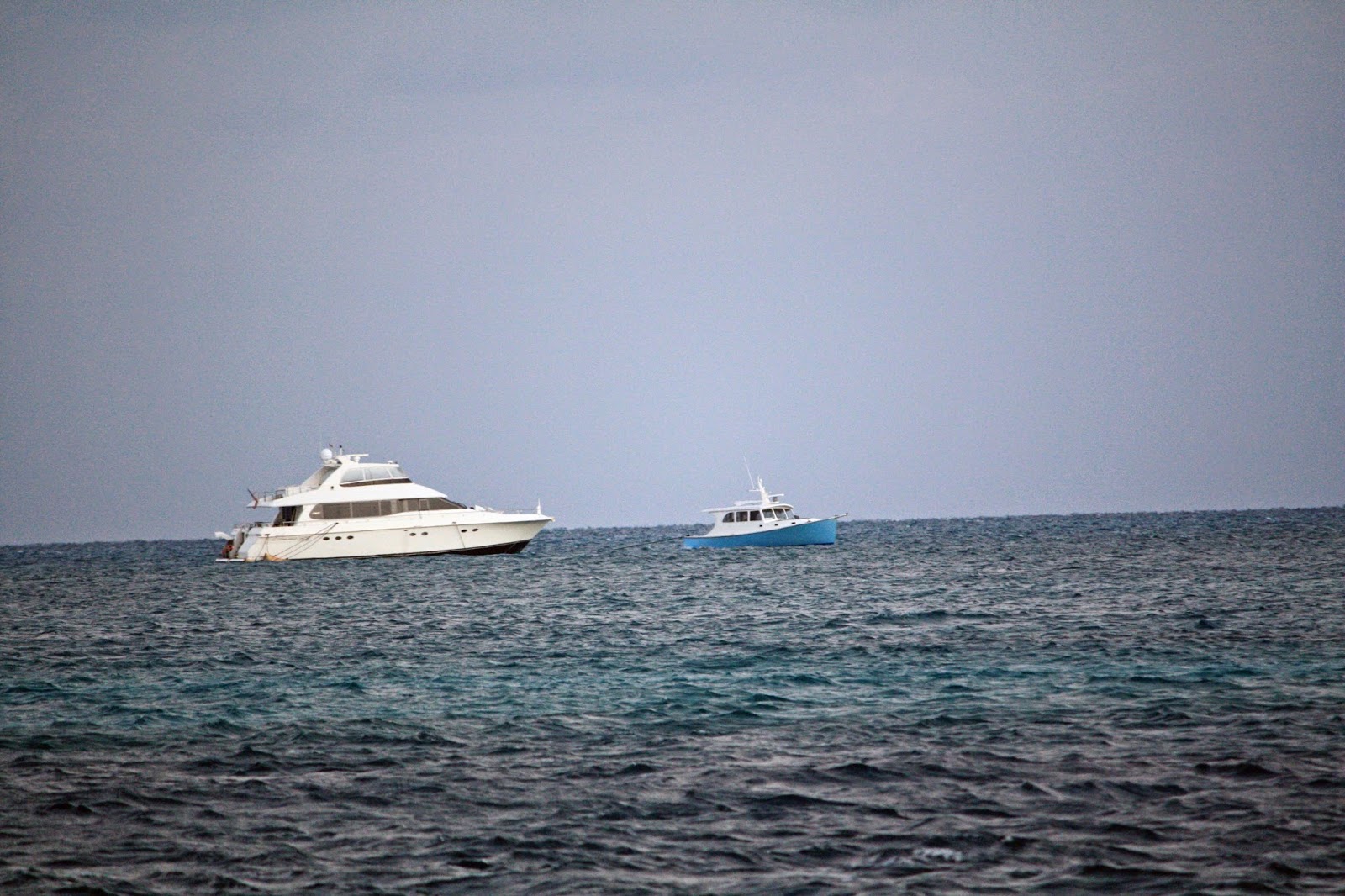 The water was clear at Rudder Cut Cay.  Kim and Emily Snorkeled each day collecting shells.  We saw an underwater statue here too before moving north to Big Majors & Staniel Cay. Check out the eyes on the milk conch in the photo below. 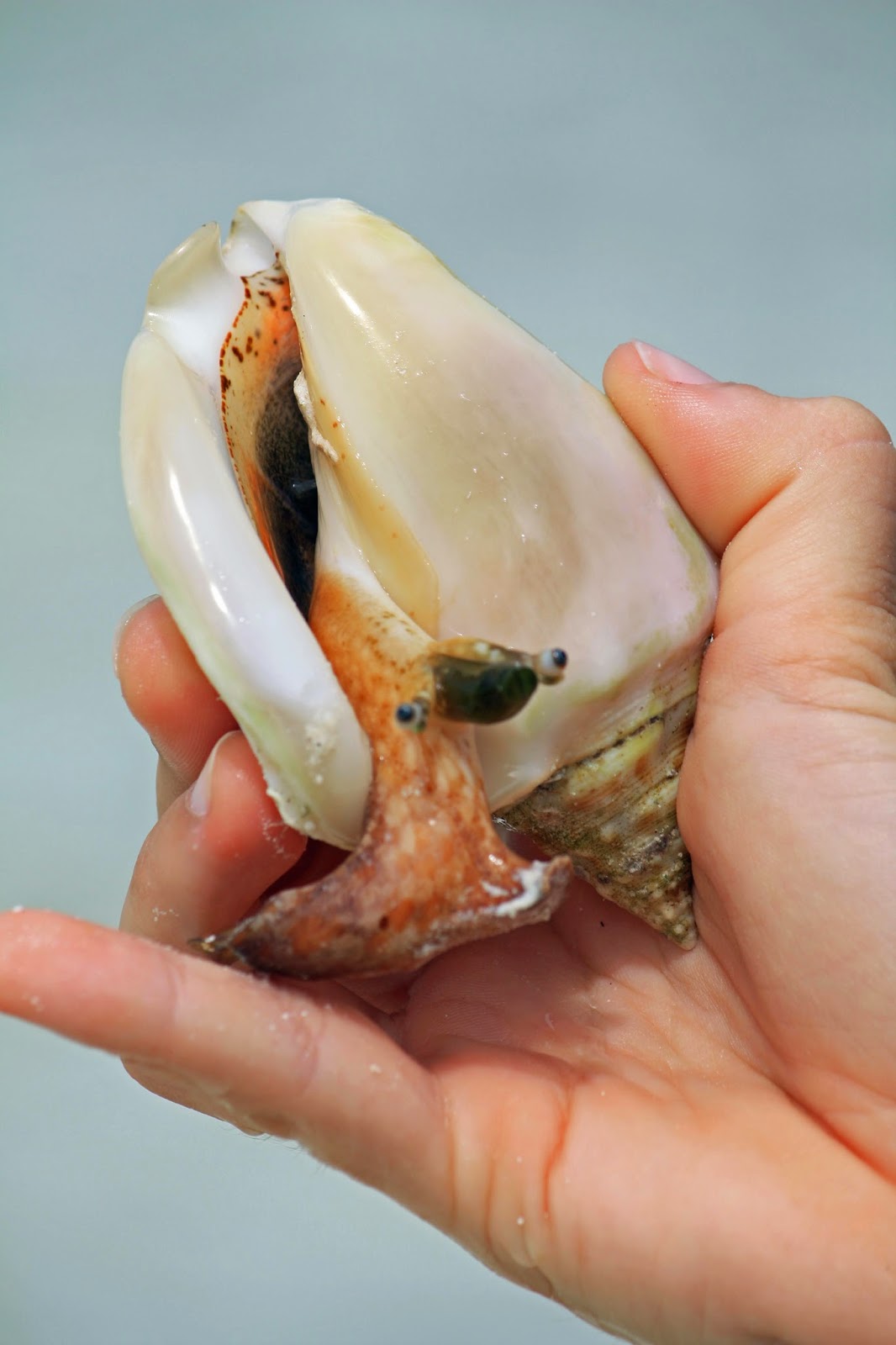 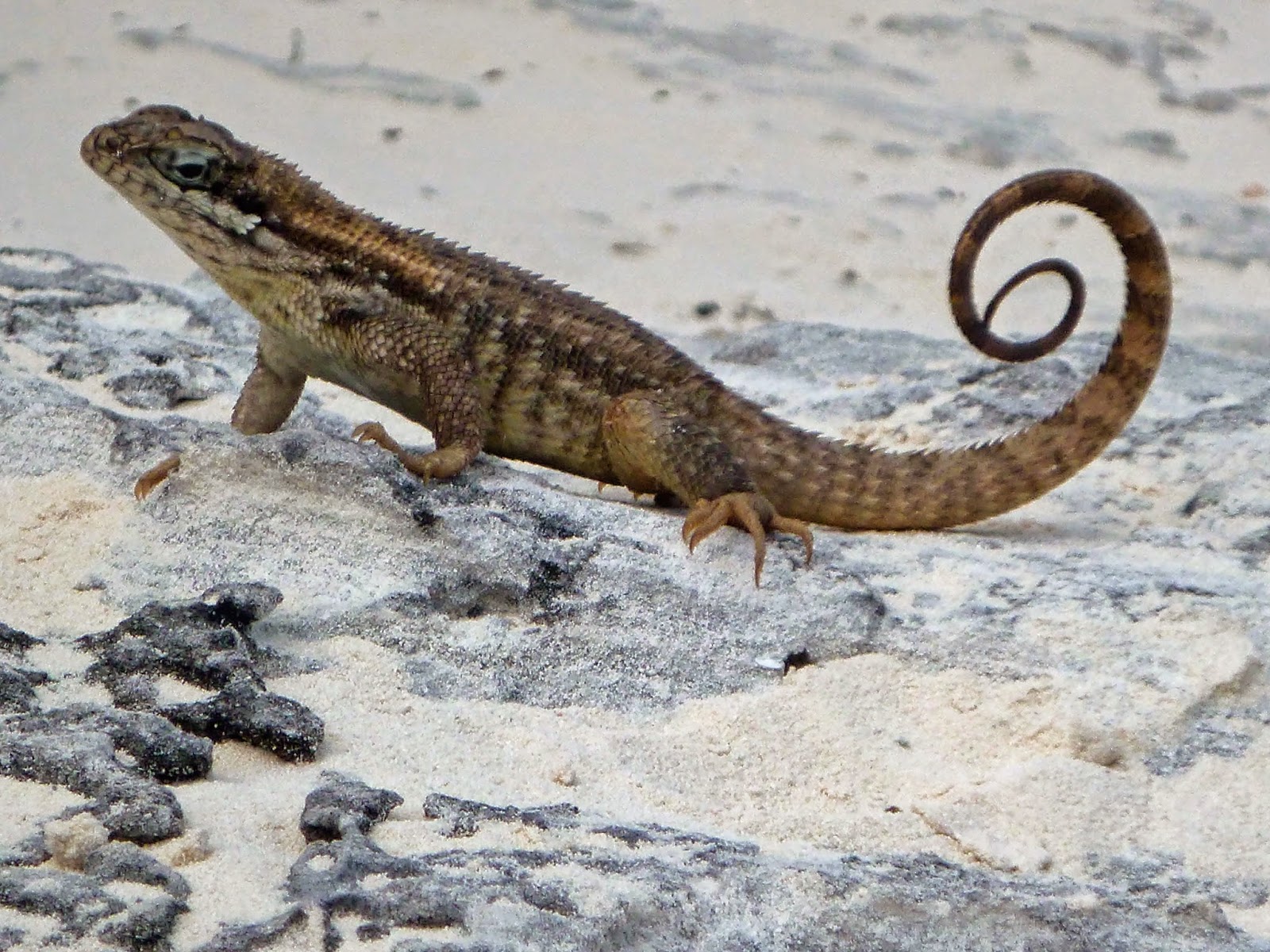 We enjoyed feeding the swimming pigs again and snorkeling Thunderball Cave.  The nurse sharks are still hanging around the dingy dock at the yacht club waiting for handouts. 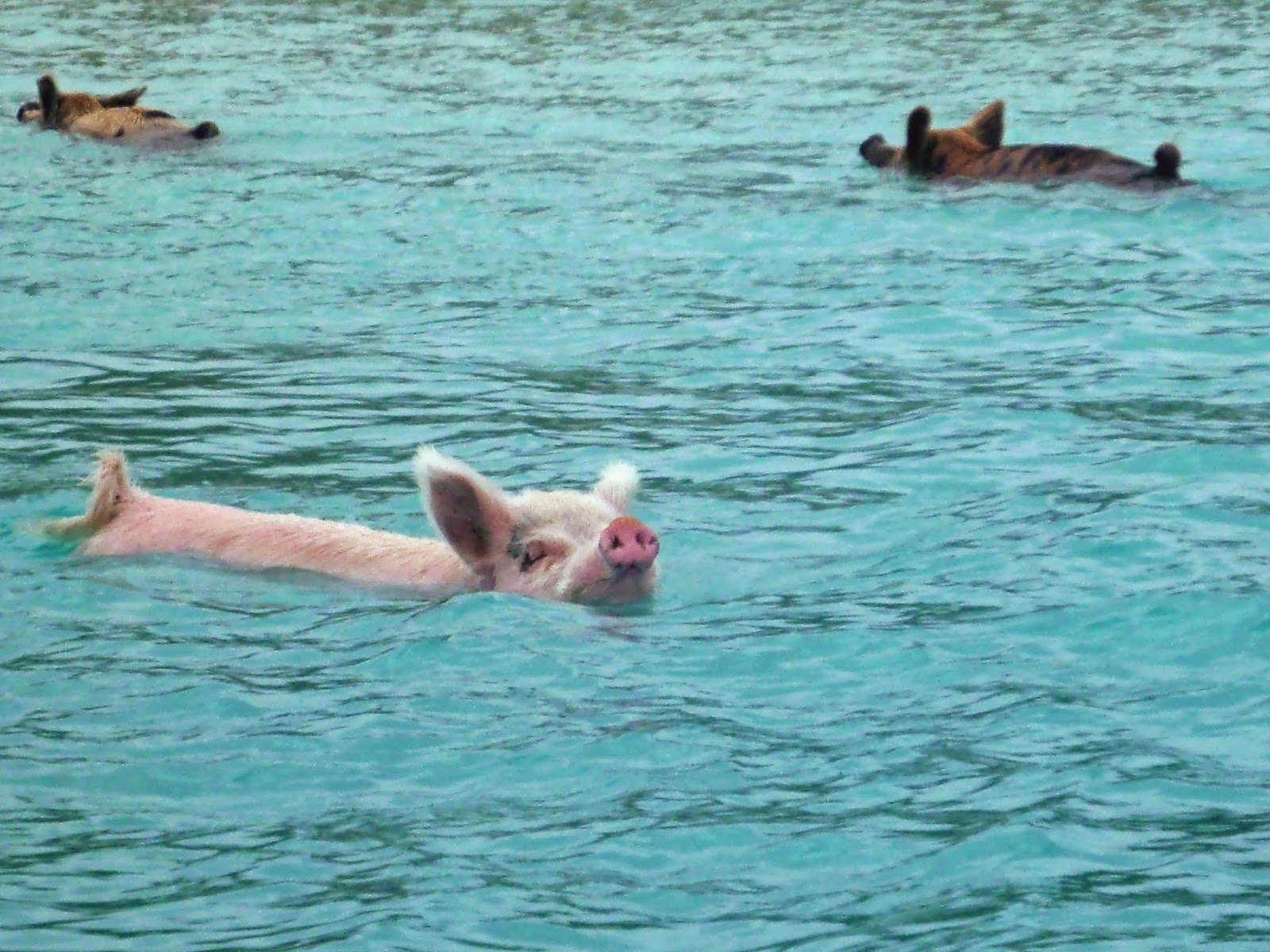 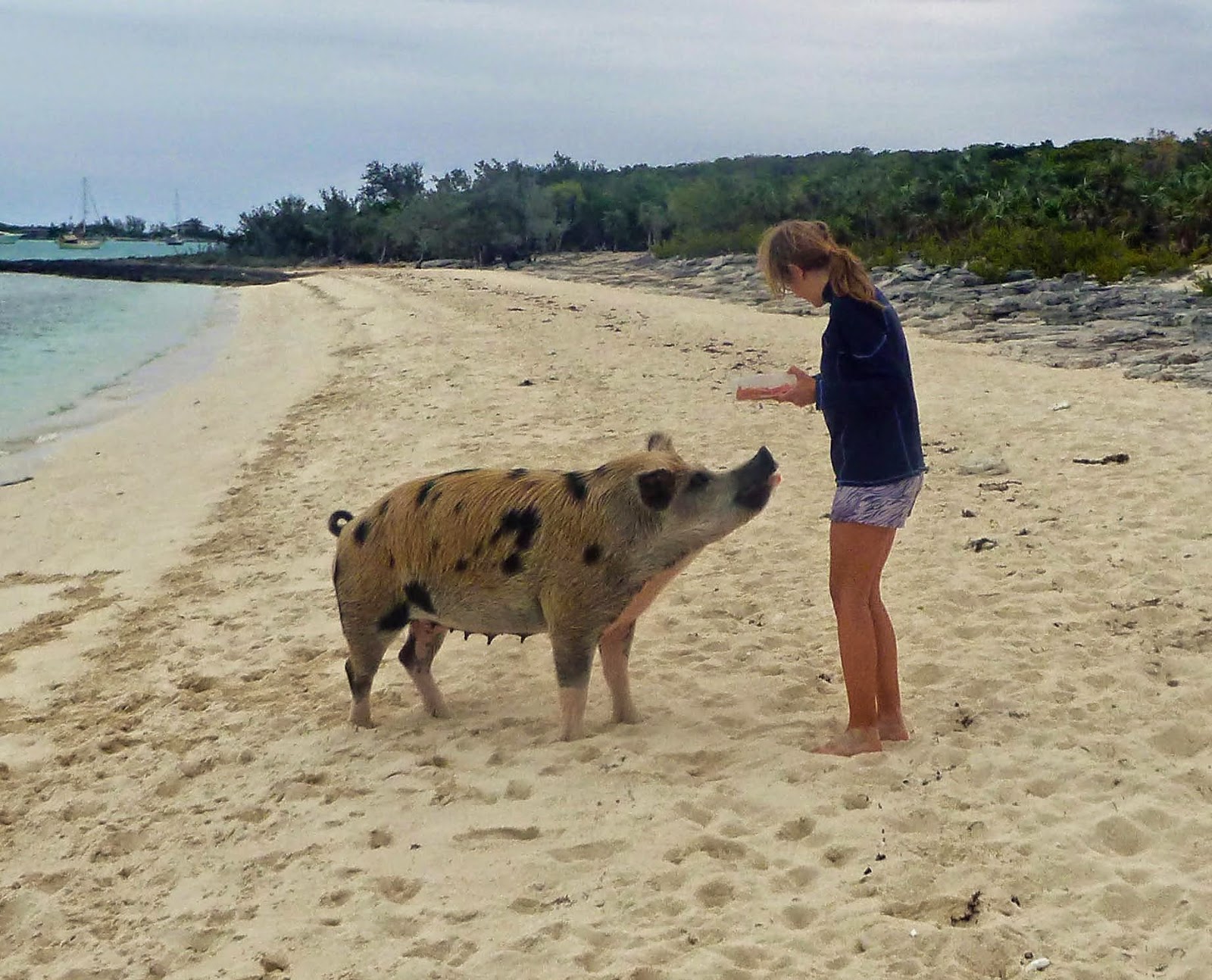 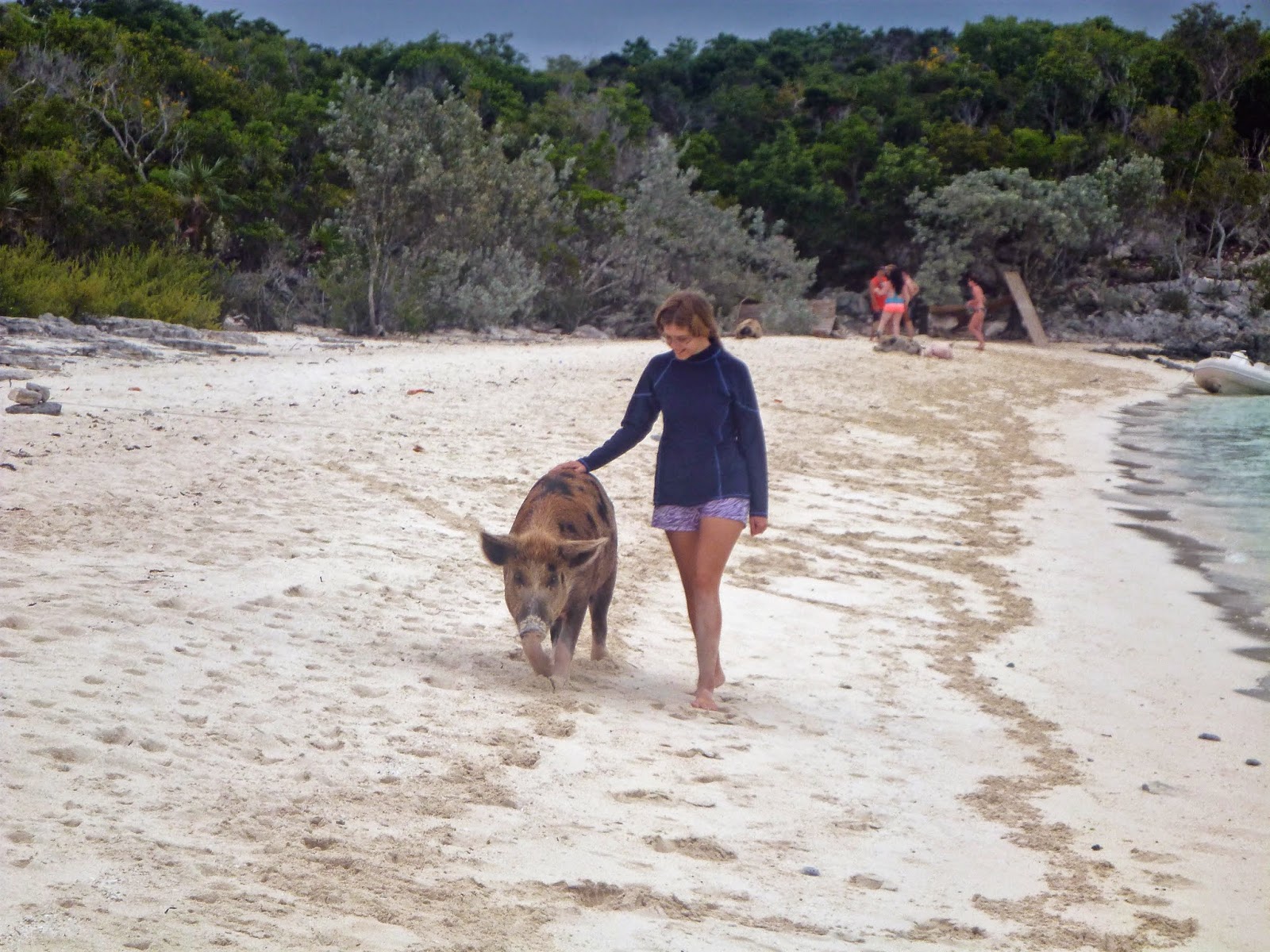 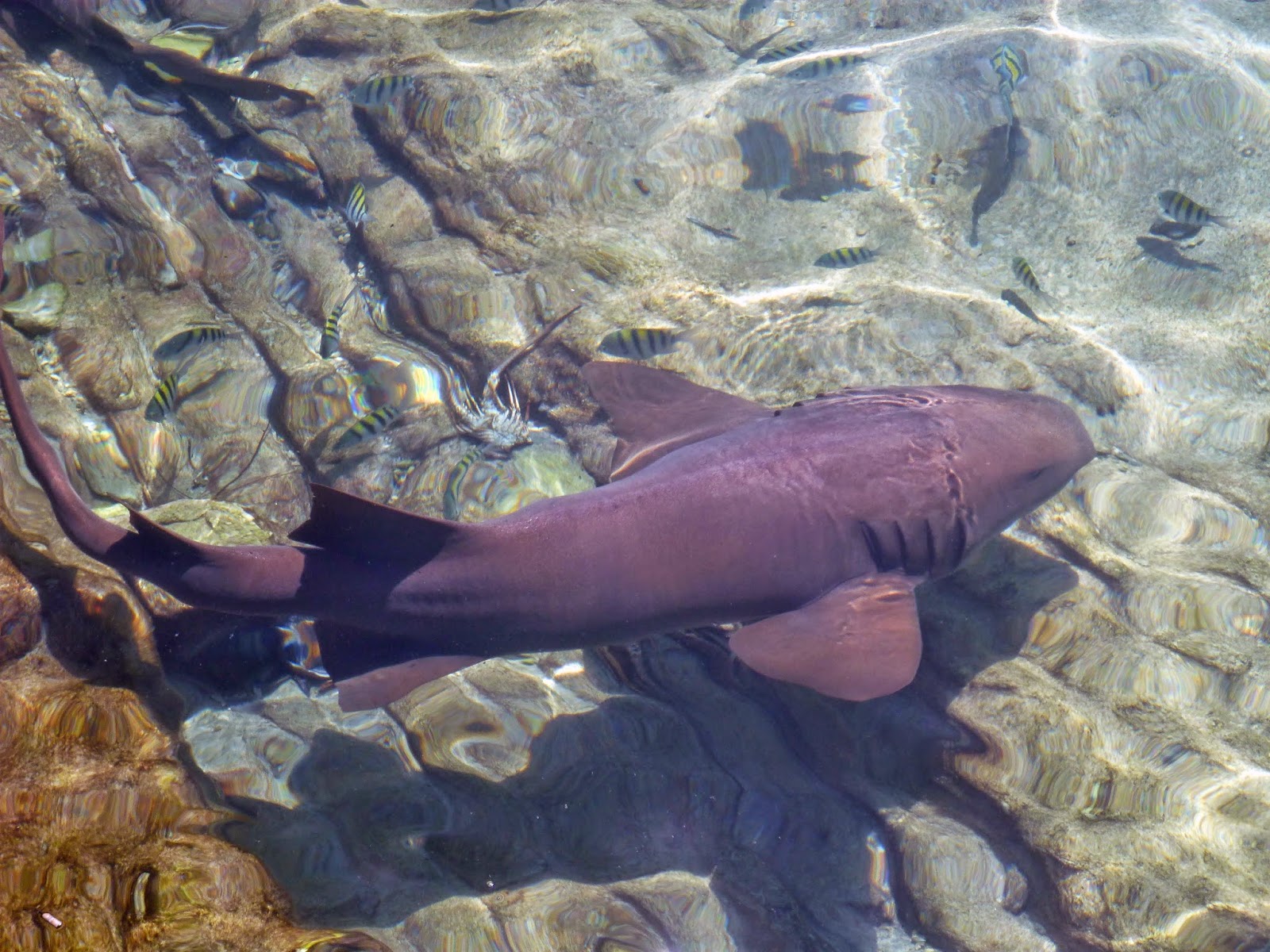 Warderick Wells was our next stop but was a disappointment because we were looking forward to feeding the sugar birds (bannaquits).  During our 2009 stop, the rangers handed out sugar and Emily had swarms of the birds on her tiny hands.  Environmental Nazis have now stopped handing out sugar and they discourage feeding them.  We ignored their idiocy, took out our own sugar and found at least one bird that remembered the good old days with us. 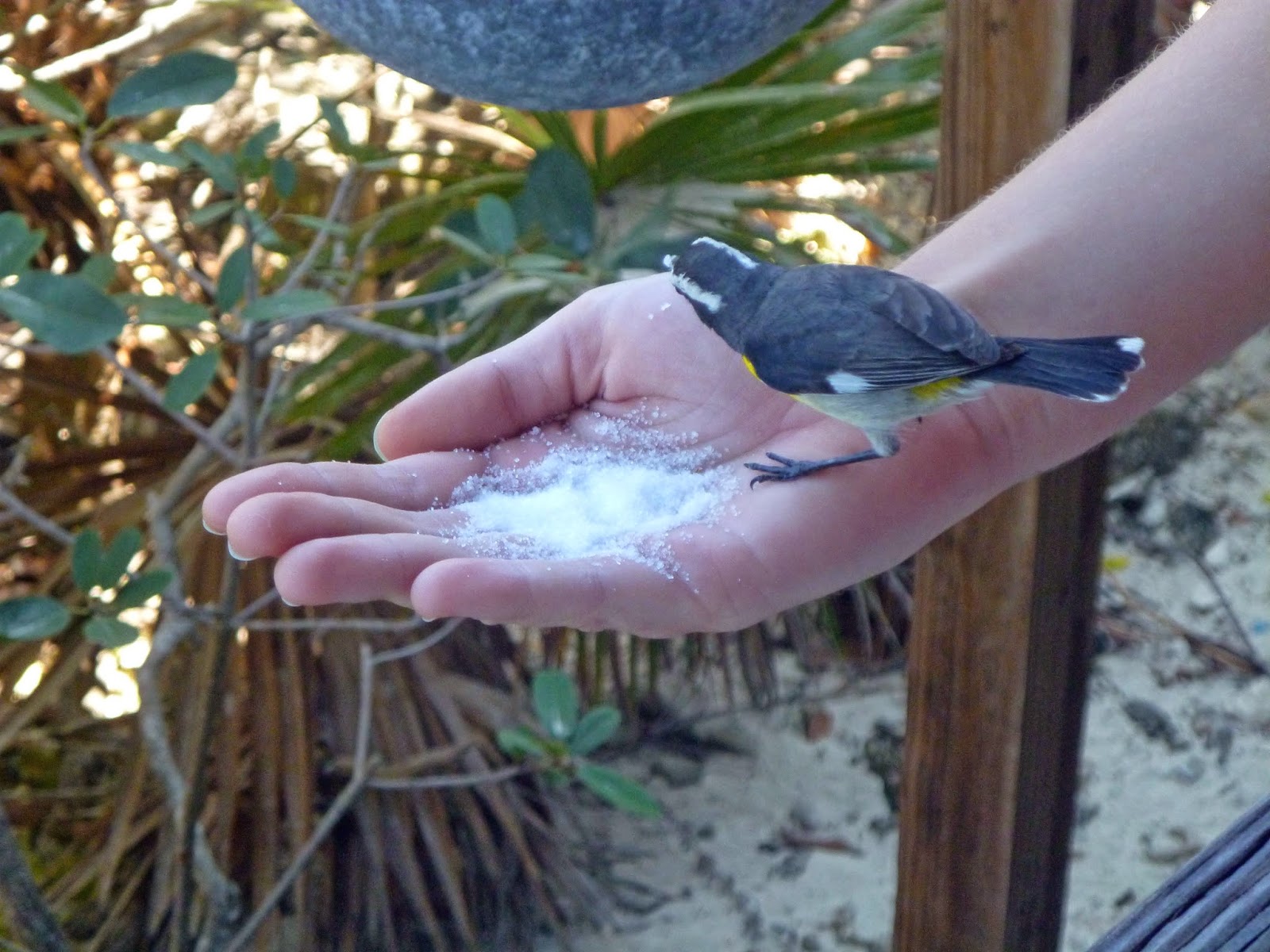 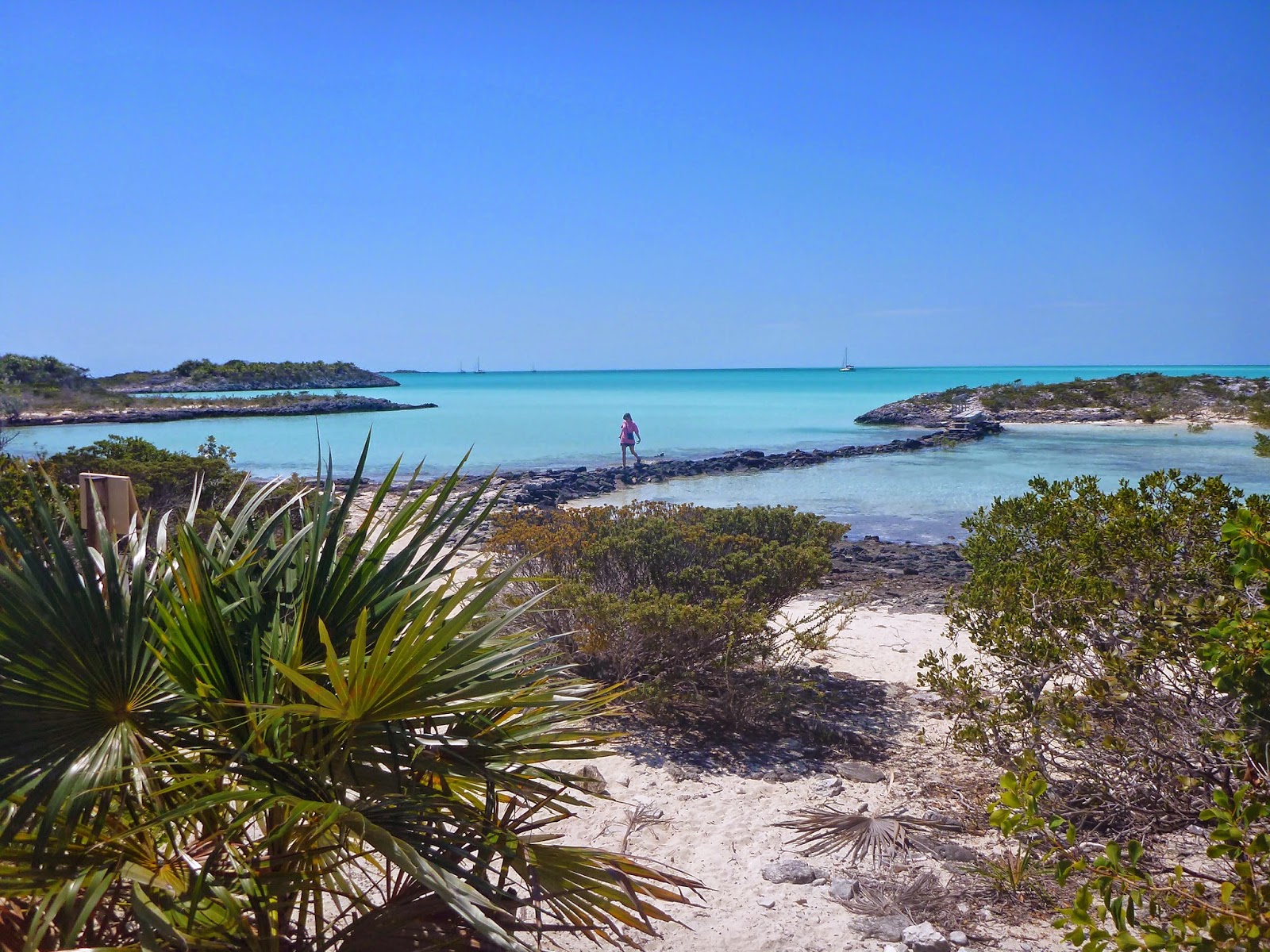 Tom and Emily hiked up towards Boo Boo Hill and Tom slipped on some loose rocks and found a different type of Boo Boo.  Despite a bloody knee we enjoyed the views.

After Wardrick Wells, we stopped at Shroud Cay.  This island was new to us and we enjoyed taking the dingy through the winding mangrove streams all the way to the eastern side and a powder white beach. 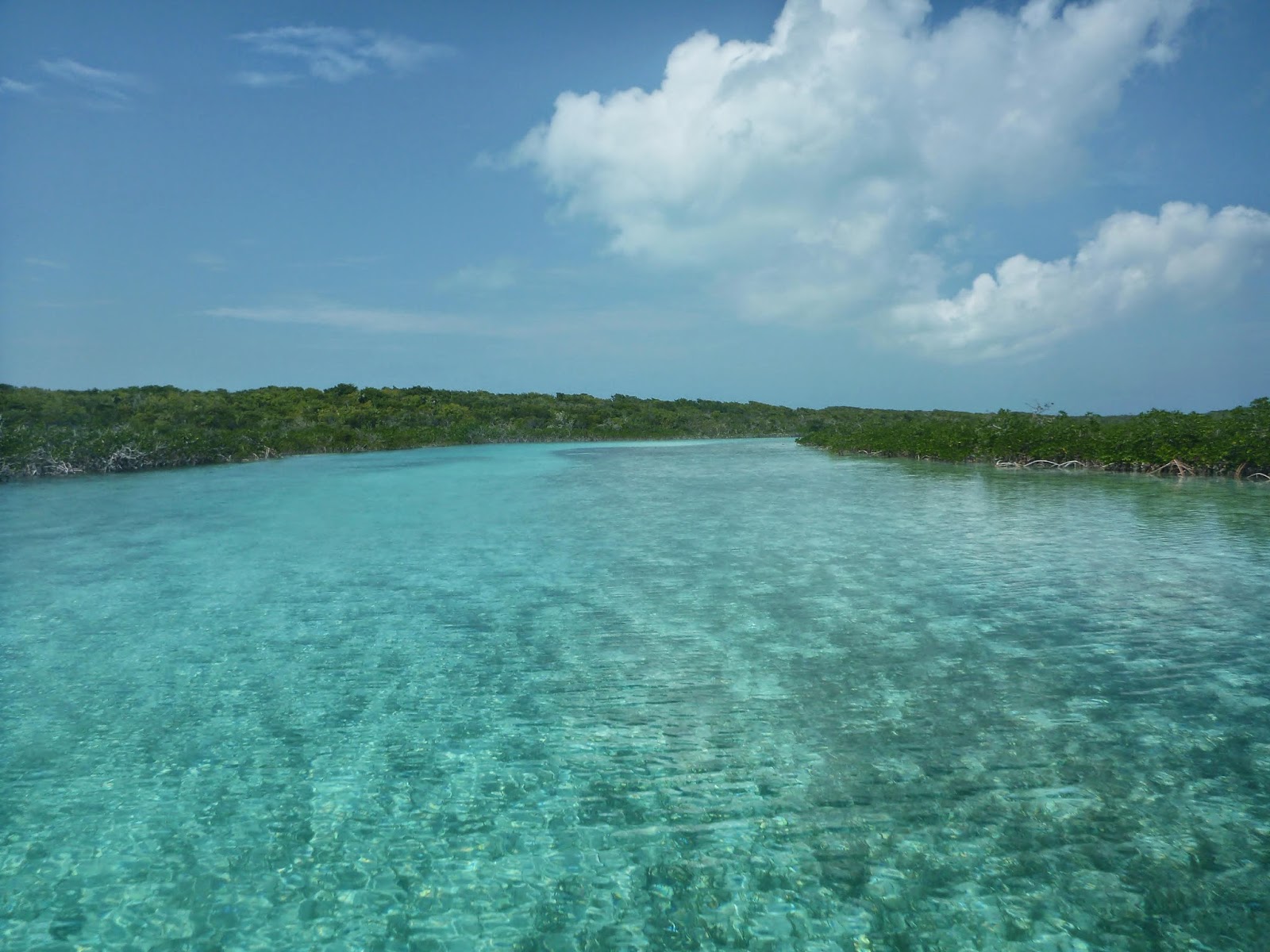 Our last stop in the Exumas was Allen’s Cay.  Although crowded in the main anchorage, we found just enough room to set our hook in southwest Allan’s Cay.  We were all alone with our private white sandy beach. We were a bit anxious as the winds rose to 25 knots and started clocking around.  At two points in this process the stern of Emily Grace was only about 30 feet off the jagged coral coast.  The anchor was dug in hard however and held well.  This was not the first time we were thankful for our oversized 120 lb Spade anchor! 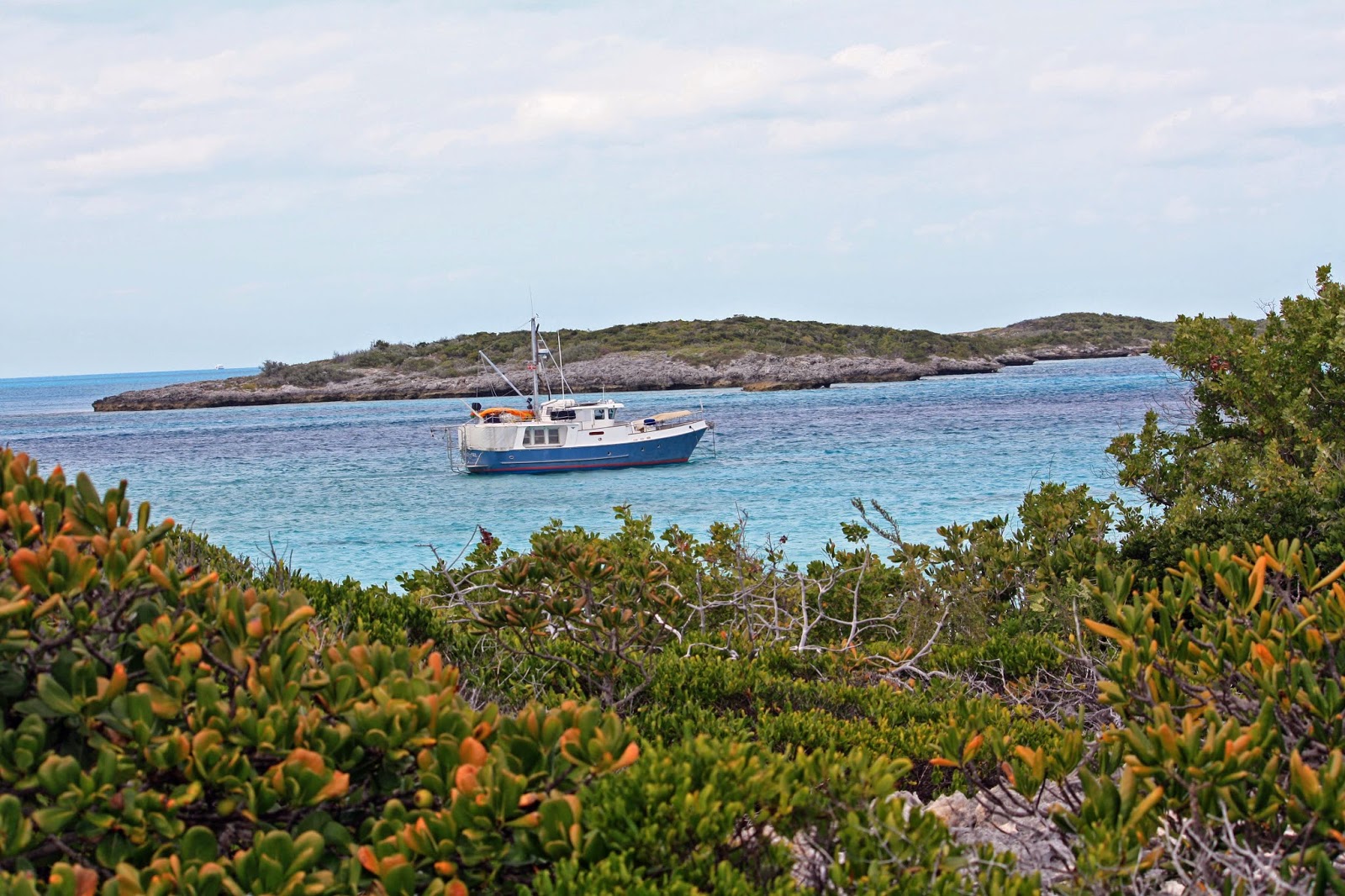 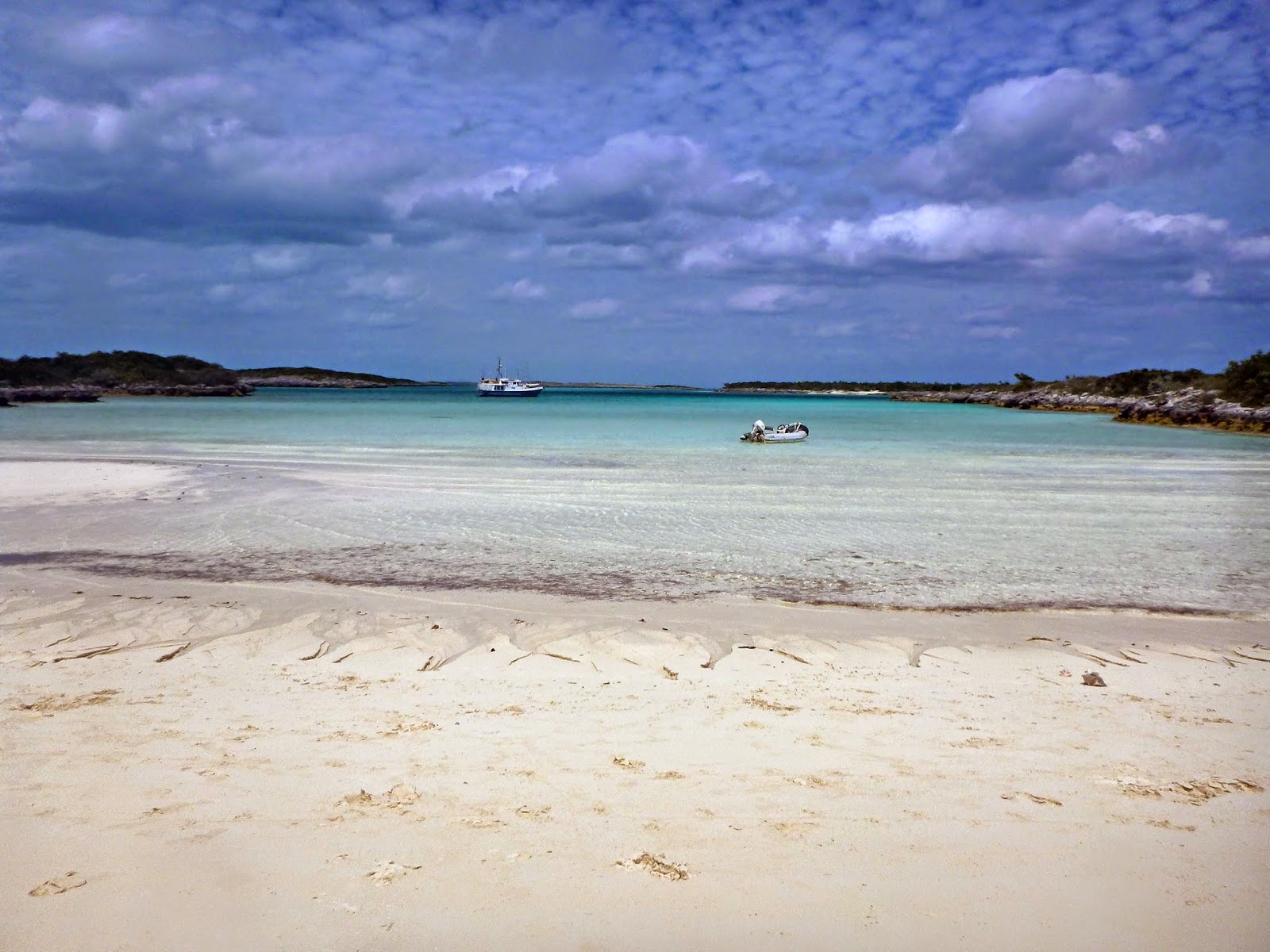 The big attraction here is the iguanas.  That same private beach in our cove would swarm with hungry iguanas every time we would come to shore with our table scraps.  Judging from their numbers, they seem to be doing just fine. 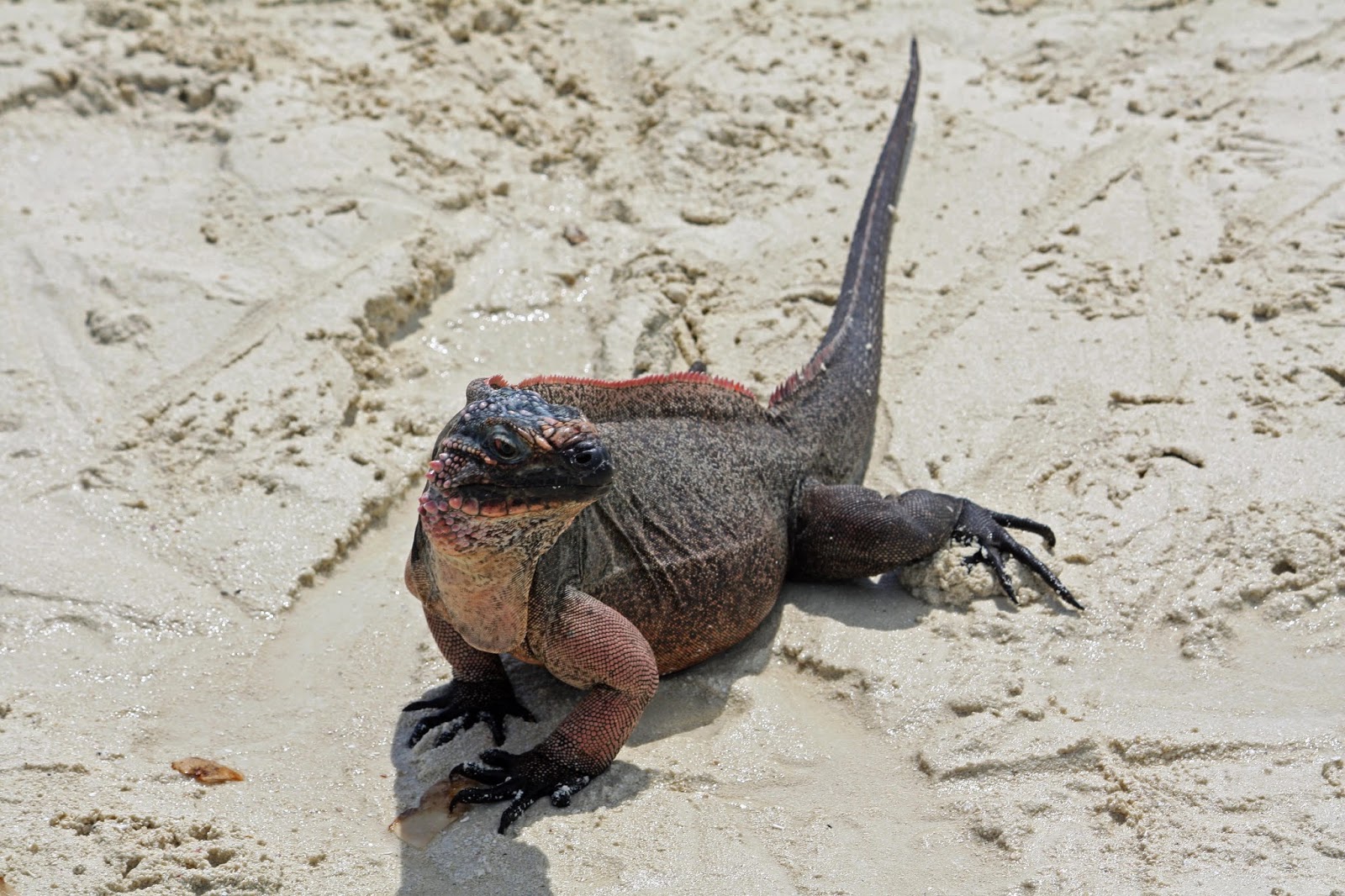 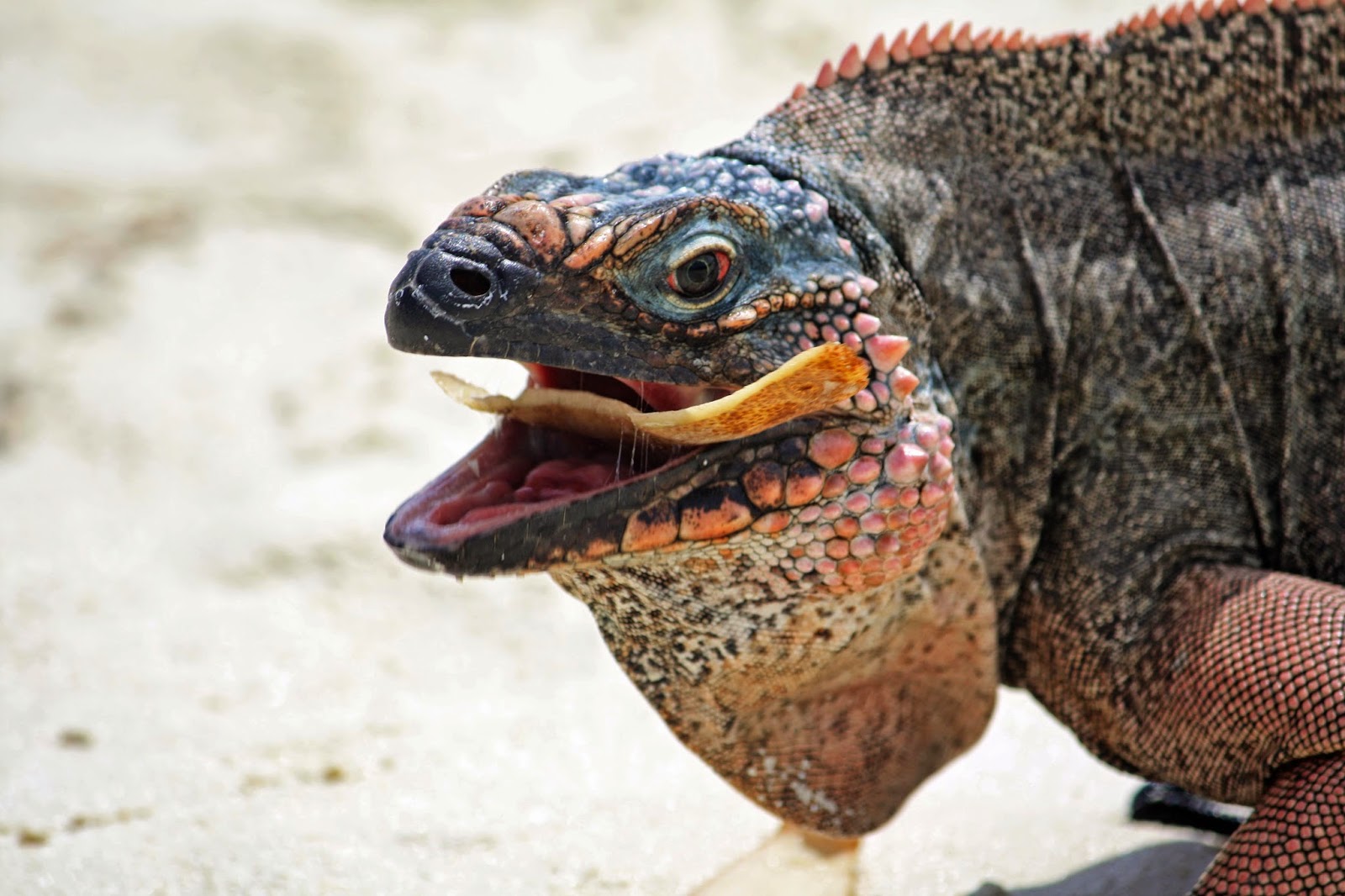 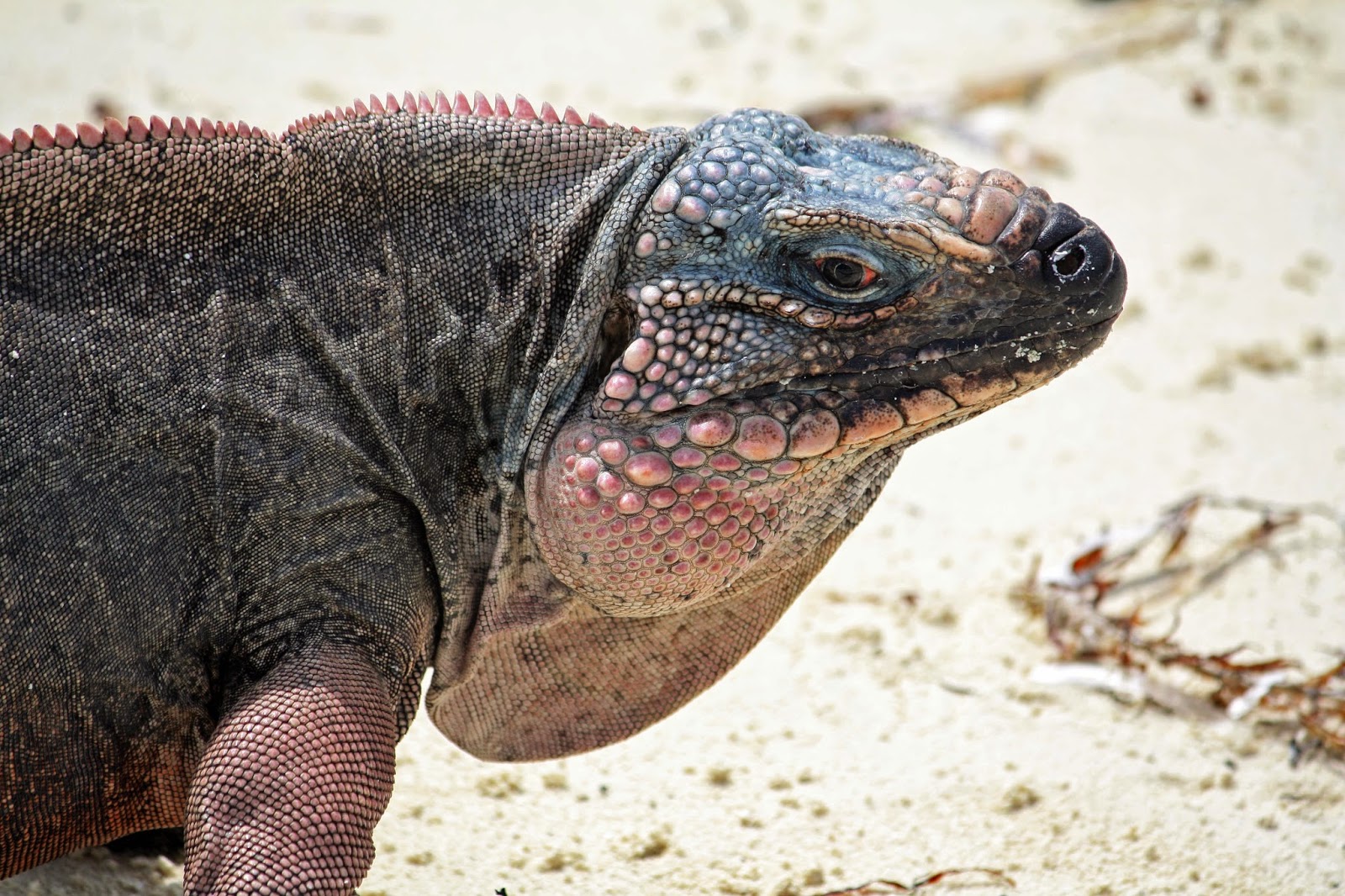 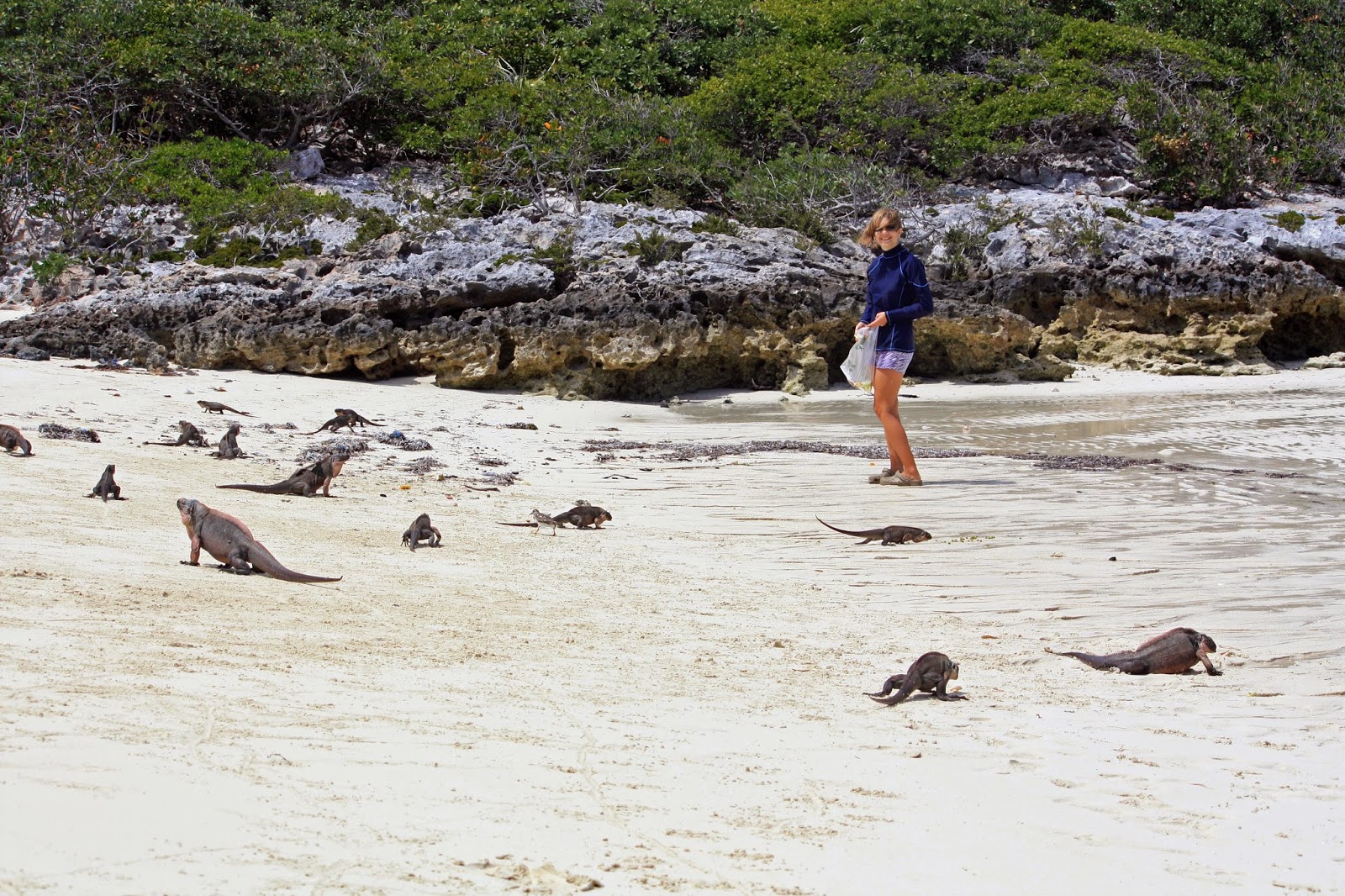 From here we will make a short hop northeast to Spanish Wells at the north of Eleuthera before heading up to the Abacos.  These are all new islands to us and we are anxious to see what they have to offer.  Come along. 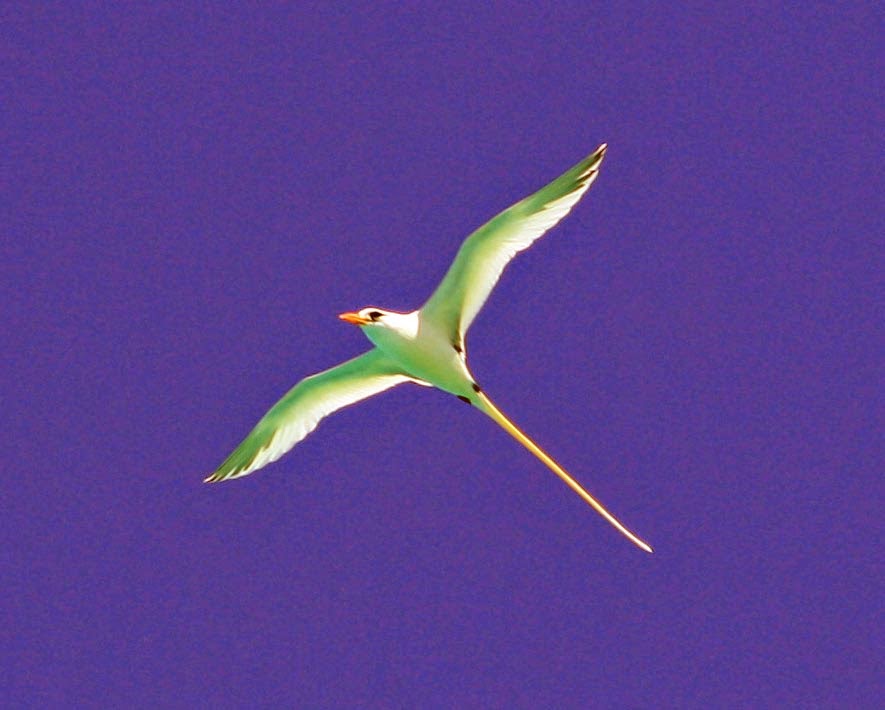 Wow what a great place.  There is a really large anchorage here and although shallow, we managed to get pretty far into the north to the edge of the 2 meter deep water to drop the hook.  There is a nice floating dingy dock at Long Island Bree…

After we got the dingy fixed and lowered the waterline by bringing aboard more groceries, we fueled up and headed just offshore to Isla Palaminos.  They have free moorings here and that made for an easy departure at 4AM for our  night passage…

We spent several weeks exploring the British, American and Spanish Virgin Islands.  We arrived at the BVIs first and after checking in Virgin Gorda, we visited the Bitter End Yacht club that we last enjoyed with my mother back in 2009for mother’…

We had a fine run to St. Barthelemy better known as St. Bart.  With its sharply contoured rocky hill, a nice port and gorgeous beaches, it has become a world famous chic destination for the well-to-do “in” crowd including the rich and famous, movi…

Nevis and St Kitts were nice for us since both are less traveled than many of the Caribbean islands.  We had a downwind run from Antigua and settled in just off the Four Seasons hotel.  We lowered the dink and were soon checked in for a week…

While folks back home in the northeast US (New England) are digging out from a powerful winter storm that walloped the region with raging winds and blinding snow we are struggling with our own weather woes.  It may be subzero temperatures there, b…

We entered Guadeloupe in the Isle de Saintes. The Saints are an archipelago of French islands, just off the southern coast of Guadeloupe. And if there was one word to describe Les Saintes, it would be charming. The main town of Bourg des Saints is real…

We spent about a week in Le Marin in Martinique.  It was very calm there and the water was surprisingly clean and clear.  There were quite a few boats anchored near but we found a nice spot.  Access to the town was made easy by numerous …