All Things Must Pass

All things must pass None of life’s strings can lastSo, I must be on my way And face another day George Harrison once wrote these lyrics…  A lot has passed since my last post.  Sadly, we lost our best friend and mate, Ra…

After much soul searching and many sleepless nights, we’ve decided to sell Istaboa.We’re not aggressively trying to sell, but a reasonable offer will buy her. If not, we’ll enjoy another summer aboard, which may be the best thing anyway.I’ll add more d…

Once Again, The Sun Rises

There were times I thought it never would again.  Congratulations, America Nordhavn 57-26 Istaboa

From Cruising World an article by Jen Britt: A new music video by folk artist Sparxsea, which features footage from solo-sailor Holly Martin’s voyage aboard her Grinde 27, Gecko.

Love John Prine – Prine’s one of those song writers you won’t hear on the radio often, but when you do, you’ll probably remember the tune and the lyrics… his songs make you smile and warms your heart.He’ll be missed, but to paraphrase something Jim D…

View this post on Instagramsent with love from @jeffbeckofficial and meA post shared by Johnny Depp (@johnnydepp) on Apr 17, 2020 at 7:21am PDTNordhavn 57-26 Istaboa

Mel and I won’t complain. We’ve always enjoyed our solitude, though we’ve never thought of it as something that could save our lives. Sadly… we do now.
Like most people, we wake thinking this is all a dream, but no, it’s not. There’s still some bug, virus, out there that’s mercilessly killing some and making others gravely ill. We, especially me, are on the short list of folks more apt to contract this very infectious disease. Though it’s now afflicting younger people it’s us >60 folks that it’s killing most often.
Then there’s the damage this fucking bug is taking on the global economy. Yes, this virus is killing many, but the toll it’s taking on the healthy and those who survive is ruinous. The service industry is being destroyed and millions of people are out of work. Honestly, I don’t see how we’ll crawl out of this abyss anytime soon, but still, I have faith in capitalist ingenuity. We’ll figure a way, seems we always do.

Out of disaster opportunity is born, however one must wait till the flames go out and the smoke clears. Unless you’re Purell or Charmin.

Certainly not tragic, not death nor sickness, but not frivolous either,  the lives and dreams of some of our boating friends have been seriously altered.
Our Kiwi friends are on a boat without a country. At this time, they’re anchored somewhere around Georgetown, Exumas, Bahamas. Per Ted, “We’re fine. Bahamas have total lockdown. Everything is closed. Can’t leave the boat.”.  At first they were allowed to go ashore for supplies, but now the Bahamian Government has stopped that. They can’t move from island to island so they just sit on anchor waiting for something to change. To make their lives even more difficult, The U.S. will not allow them to come back either; seems they overstayed their welcome. Even though Ted is a U.S. citizen, the U.S. Immigration and Customs Enforcement’s (ICE) says no, no, no.  Yes, I know, trapped in paradise. —Right? — but after a while, trapped is trapped.
We have other friends who were making their way south, down the Caribbean chain of islands, then to Panama to cross the canal. After that their dreams would carry them wherever, knowing Roam, a circumnavigation was on the top of their list.
Abruptly stopped by the authorities in Puerto Rico, they soon realized the dream was scuttled. They turned North and due to travel restrictions the Bahamas were bypassed , it took 7 days at sea, but finally they arrived back in the USA. They’re now quarantined on anchor somewhere around Vero Beach, Florida.

This is all so crazy, so surreal. Just weeks ago, the stock market flying high, these times were being hailed the “Roaring 20s”.  Seems like one day we were dancing in the ether, then the next we were sequestered in fear, hiding from some unknown pathogen, scrambling for toilet paper.
At first we were told,  “One day it’s like a miracle, it will disappear” then we heard, “opened up, and rarin’ to go by Easter”, after that, “Always known this is a real—this is a pandemic”, and now, “It’s called the invisible enemy, and that’s what it is: it’s an invisible enemy,”

Okay, I’ll crawl out of the Rabbit Hole now.
Life goes on if we’re happy about it our not. Still, it could be worse, though not by much.

So every morning I wake very early, feed the boys, walk out with them and look up at the stars while enjoying the pleasant Florida weather. During this time there is no news, there are no worries, just peace and quiet as the stars fade and the sun rises.
Once back inside, I pick up my laptop and dig through the thousands of pictures of the many places we’ve been so fortunate to visit aboard Istaboa. Every morning I put a new picture on the large TV monitor and all day, every time we see that pic, it makes life seem a little better. Good memories are good things. We need all the good things we can get right now.

Today’s Pic: Leaving Nassau, we passed these cruise ships before turning North for The Abacos. Later that day, just off the Southern tip of Great Abaco Island, we encounter a pod of Killer Whales. This was a very good day. 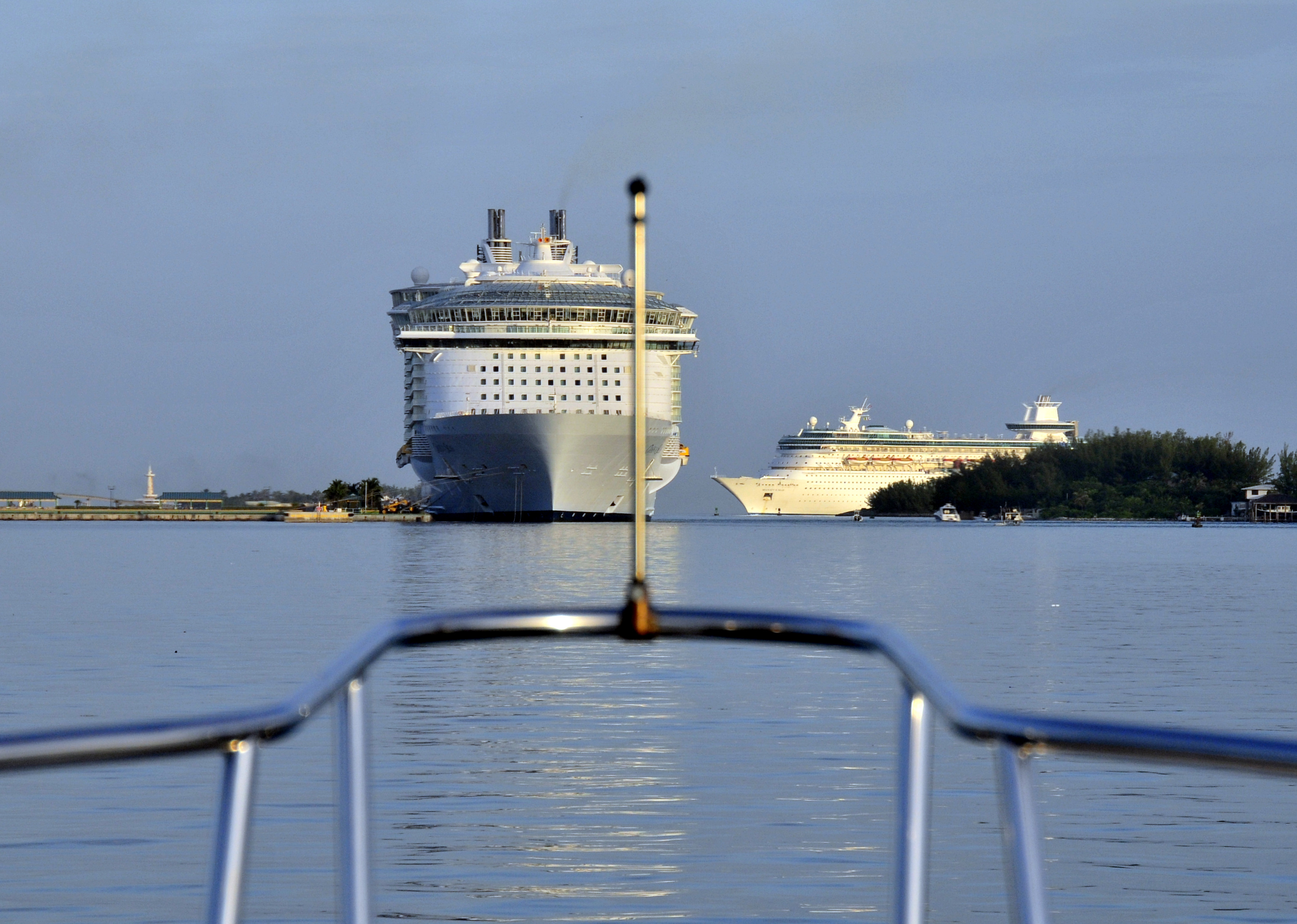 For those of you who enjoy boats, boating, and the folks who live the life:
The story of the extraordinary lives of Nancy and Bob Griffith, who circumnavigated the globe not once but three times between 1960 and the late 1970’s, taking their 53-foot sailboat, and their kids, on 13 major voyages to places no small boat had gone before.
It’s streaming on Amazon Prime Video and well worth the time – and right now, most of us have plenty of that.