One of the big plusses of being in a marina is being able to run the air conditioning 24/7. One of the big negatives of leaving a marina after running A/C 24/7 is that it is hard to adjust back … Continue reading →

Q: What kind of food do you cook onboard?  A: Currently, Keith’s favorite meal is chicken tacos, so we make that frequently. Keith also loves homemade chicken noodle soup, so Christi makes soup out of the bones every time she … Continue reading →

Harsh, unrelenting winter weather has continued bar an interlude last weekend when we had a few days of relatively fine, but still chilly weather. At least this gave all the keen fishos a chance t get out on the water.

Rapport has lain forlornly in her marina berth until we pulled her onto the hard stand early last week for her annual out of water check. We had noticed Rapport wasn’t pulling her full rpm – only reaching about 2,550 when she usually reaches about 2,800. In one sense this doesn’t matter as we normally onlycruise at around 1,600-1,800 rpm. However if a diesel engine doesn’t reach her designated WOT rpm it’s a sign of problems such as dirty hull and/or running gear, turbo issues or cooling issues in the case of an overheating engine. We weren’t running hot indicating that a fouled hull was the problem. Sure enough when we pulled Rapport out the hull was quite fouled, the props had a bit of growth and the shafts also had some growth and small mussels growing. Anti foul was last applied Feb ‘21 so we guess this is not surprising. New anti foul was applied plus Propspeed on the props and shafts. Also removed some fishing line tightly wrapped around both shafts near the props. This had to be burned off. Some paint imperfections in the cockpit also rectified.

Rapport was booked to be re-launched Thursday morning 18/8, however on the preceding Tuesday it was apparent we were in for a real blow so we delayed this a few days. Sure enough on Thursday there was a NE wind in the high 20 knots, gusting 40 with heavy rain. I’m glad we postponed.

Now all we need is some good boating weather or even half reasonable would be OK.

In Isla Cornados, we went to the beach. We also snorkeled. We went on a walk. Dad hiked a volcano while Mom and I went to the other side of the island. I saw lots of cool fish. I jumped … Continue reading →

It’s another early morning departure as we continue working our way south along the Inside Passage. Today we have several rapids to transit. It’s critical that we arrive to Green Point Rapids at slack tide. This rapid has currents up to 7 knots with whirlpools and over falls. By arriving at slack, we can avoid […]

On Tuesday morning (August 9), we left Puerto Escondido at 0830 to go to Loreto to get our park pass and do some more grocery shopping. We went to the park office first, arriving right before it was supposed to … Continue reading →

Jan Mayen Island Monday, August 15, 2022 After two days of relatively calm seas and overcast skies, and finally sunset and sunrise as we head southwest, we arrived at Jan Mayen Island at 0700. Beerenberg shrouded in mistJan Mayen I…

By Trawlers on August 15, 2022 in The Pearl
“Don’t educate your children to be rich. Educate them to be Happy. So when they grow up they will know the value of things, not the price.” –Steve Jobs 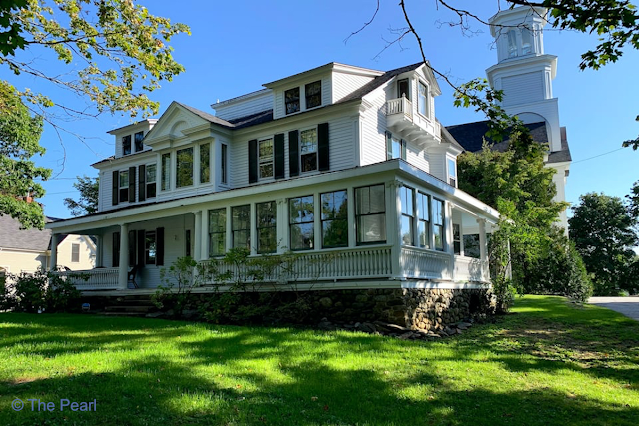 We’re back in Maine, except for a drive through on our way to New Brunswick in 2019, we haven’t spent any time here since 2016. We love Maine and it feels wonderful to be back. We’re here this time with our family to spend a week relaxing and exploring the Camden area.