We have a short 14 mile trip from Roche Harbor to Sidney,B.C.  We head directly to the customs dock at Van Isle Marina.  We are entering Canada under a “Work Order”. We have accumulated a long list of maintenance items for Philbrooks Boat Yard to address.   After clearing customs, we must go directly to Philbrooks  which is located right […]

After a two year delay due to the Covid pandemic, we are finally in the air and headed to Athens.  After two days in Athens, with a trip to the Oracle at Delphi, we board Seabourn Encore for a two week voyage touching many of the famous Greek Isles and several stops on the Turkish coast, including Istanbul.

We are joined on this cruise by three other couples from three separate orbits in our lives.  One couple from Virginia we met on our first Seabourn cruise to Antarctica, one from Houston, Texas we met during the build and delivery and Alaska cruises on our Selene trawler and one from Bellevue we have known for more than 30 years through our church membership.  It is a diverse group, but one that should have a lot of fun as we enjoy the shoulder season weather in the Greek Isles.

The weather is reported to be 90 degrees when we land in Athens, but that is after a 6 hour layover in London Heathrow.  The connecting flight is purported to be full.

After takeoff, we proceeded right to 39000 feet  and the meal service started.  Miriam indulged on the mushroom ravioli and Patrick had the braised short ribs.  After dinner and drinks we all retired for a few hours sleep before our arrival in London Heathrow before 0700.

The wheelchair service lacked something when we arrived, we had to wait until everyone had disembarked and then stood in long lines with no fast track, until we said something.  Security was tighter than SEA, and it took some time to get Miriam through and into the British Airways First lounge.

Kent and Melody were unable to join us, they were in the business lounge, also nice.

The lounges were busy, the main terminal was very crowded and few masks were seen.  Apparently the pandemic is over in the UK.

After a 6 hour wait we finally headed to the gate for the Athens flight, now delayed by 30 minutes.  After boarding and with the doors closed we were informed by the pilot of an additional 30 minute delay due to a French Air Traffic Control strike which affected all European flights.  We finally departed from the gate more than one hour late for the 4 hour flight to Athens.  With the 2 hour time zone change we did not land until nearly 9 PM.  After getting our bags and exiting baggage claim the driver was waiting and we arrived at the hotel at 10PM, finding that Seabourn had screwed up the room reservation, which took phone calls to Seattle to straighten out.

Frank and Cathy were in the lobby and we joined them for a late drink at the rooftop bar/restaurant with spectacular views of the Parthenon, lit with impressive lights.  The sky was clear and the temperature still warm.

Kent and Melody, meanwhile were still in London, hit with the same ATC strike issues as us.  We don’t know what time they will arrive.

We are honored and excited to be members of the Cruising Club of America (CCA). The CCA is a diverse community of roughly 1,300 accomplished ocean sailors who have a passion for the less traveled and more challenging routes and for widely sharing their knowledge, experiences, and best practices. The organization, celebrating its centennial this…

By Trawlers on September 15, 2022 in The Pearl
“What do friends and wine have in common? The older, the better.” –Unknown
Lakeshore Winery first opened to the public in 1982, making it one of the oldest on Cayuga Lake. For the past 26 years, John and Annie have continued the traditions established by the first owners. Those traditions mean making a variety of wines of the highest quality; providing a fun, relaxed and educational tasting room experience; and having a good time doing it. 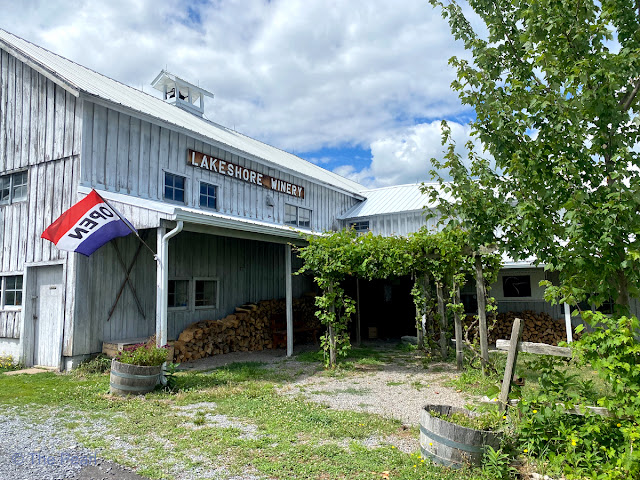 When Eric woke up, on Sunday (September 11), a few of his toes were bruised and it was a bit hard for him to walk. Not a fun way to start the day. He is glad he did not fall farther … Continue reading →

We departed Port McNeill on Monday, 8/29 with blue skies and calm winds. Timing the currents in this run down Johnstone Strait so that they were favorable (or at least not horribly adverse)  pushed us towards mid-day travel rather than our preferred morning hours.

Our destination for the night was Port Harvey on Cracroft Island. While in Johnstone Strait

and approaching the turn-off for Port Harvey, we saw ahead what we first thought was a sea lion cruising by but turned out to be a black bear swimming across Johnstone Strait from Vancouver Island to Cracroft Island. We’ve seen bears swimming across channels in Alaska and BC before but this one was paddling across waters that are frequented by orca (i.e., killer whales).  The orca here are probably focused on the migrating salmon but there could be the odd-ball whale that might want to expand its diet a bit.

The next morning, again because of the current timing, we didn’t leave the anchorage until about 10 AM.  While waiting, we watched some of the migratory fowl paddle by.  While mostly Canadian geese, we did see a lovely pair of Trumpeter swan.  According to Wikipedia, they are the heaviest living native bird in North American.  Seeing them next to a Canadian goose, the size difference is striking (forgot to take a picture).

While we hit Race Passage exactly at slack (or more precisely, “slack-ish”), our timing at Seymour Narrows was early.  Rather that jetting through with 7+ knots of current we killed an hour by checking out Small Inlet in Kanish Bay on Quadra Island.  We still had 5+ knots of current boosting us through Seymour and got twisted and turned by boils and whirlpools that extend for a mile or two downstream of the narrow section.  We joined several other boats in Gowlland Harbor for the night.

The next day we slogged our way south down the Strait of Georgia and anchored in Northwest Harbour about 10 miles north of Nanaimo. It is well protected from the SE winds that were blowing at the time.

An early start got us to Dodd Narrows about a half-hour after slack but fortunately it was the slack before the ebb.  We scooted through in no time and made our way to Montague Harbour on Galliano Island.  The presence of a marina, with restaurant and store serving ice cream, and a BC Provincial park, with a grass field for ball play, made it an attractive destination for all onboard.  We spent three nights here.

Continuing our leisurely cruise style, on Labor Day, 9/5, we traveled 11 miles to Lyall Harbour on Saturna Island.  We’ve often used this anchorage as our jumping off point for a short hop across to US waters, but in all those times we never taken the dinghy over to the public dock in Lyall Harbour and gone to the pub just above the dock.  We enjoyed a delightful lunch on an outside and dog-friendly deck with a view of Plumper Sound.

The next morning we made and even shorter 4-1/2 mile trip to Port Browning Marina on North Pender Island.  Our yacht club designates Port Browning as a satellite outstation and we are able to moor at a reduced rate.  It too has a pub with an outside deck.  It also serves ice cream in its onsite store and has ample fields in which we could engage in ball play with Drake.  Once again, everyone is happy.

In the small world category, while in Port Browning, we met Chris and Sandy who own the classic Diesel Duck Moken which is in Langkawi, Malaysia. On account Covid they have not visited the boat for two years.  They were on the boat when Covid first began an epidemic and spent several months on board before being able to return to their home in Canada on Pender Island.

We finally made the return to the US on 9/8, anchoring briefly in Roche Harbor in order to go to shore, mail an oil sample for analysis taken during the oil change in Port McNeill, get ice cream and play with Drake in the local dog park.  After those “chores”, we continued on to Garrison Bay for two nights.  The English Camp National Historical Park is situated on Garrison Bay and has a dinghy dock giving shore access to several miles of trails. One of the trails goes to the Westcott Bay Shellfish Company which, during the summer months, has a restaurant serving lunch. Not surprisingly, oysters are featured on the menu. Marcia did a excellent job of shucking a half-dozen of the raw oysters we had.

Our penultimate cruising destination was Deer Harbor on Orcas Island. Our yacht club leases dock space at the Deer Harbor Marina and we ended up having that space to ourselves for three nights. The rest of the marina, however, was quite busy and we watched boats come and go.  One of the boats that arrived was the “older sister” ship to ours “Kwakatu.”  The folks we met are the second owners who bought it about three years ago.  They live in Minnesota but the boat stays in Sidney, about ten or so miles north of Victoria, BC.

We took the final leg of our summer cruise on Tuesday, 9/13 and crossed, with generally favorable currents, the Strait of Juan de Fuca, plodded down Admiralty Inlet, and found our way into Eagle Harbor.  We were secured to the dock where the boat will spend the winter and the engine off at 1845.

The Aftermath of Hurricane Kay

On Friday morning (September 9), we were surprised to wake up to no wind and no rain. The storm had cleared much earlier than expected. What a relief! It did start to drizzle not long after we woke up, but … Continue reading →

I liked the La Mona anchorage. Mostly, we played at the beach. I had fun with with the kids on Gen M and Double Deuce. We went to a costume party.  I liked the party at first, but toward the … Continue reading →

Thursday, September 9 – We were all up very early. In good news, the forecast had improved to only 30 to 40-knots of sustained winds with gusts to 50. Also, the worst of the storm would hit in the late … Continue reading →