While we were rounding the world in Dirona, so too was the oil rig Polar Pioneer, including a stop at our home port of Seattle. The rig circumnavigated in 2014-2016, starting in Norway, then to Singapore and on to Alaska for an assignment, then to Seattle and back to Norway via South America. While in…

Matersfjorden is one of the wettest regions in the country and in 2005 received 8.8 inches (223 mm) of rainfall in 24 hours, the second highest ever recorded in Norway. The fjord also is home to the 230MW Blafalli Vik power station and some fabulous scenery, with 4,087ft (1,246m) Ulvanosa soaring above the waterway and…

Our last post prompted a question about refrigeration from a reader in France, so here’s a few comments on that subject.

When we were in the Med meetingfellow cruisers (the vast majority of whom were aboard sailing yachts) one of the most common discussion threads was the difficulty of keeping house battery banks charged. In virtually all these cases the cruisers with these issues had battery powered refrigeration. Modern technology has certainly reduced refrigeration’s power requirements, but there’s no doubt it’s stilllikely to be your biggest current draw.

Boat refrigeration is powered in one of the following ways:

1. An engine driven compressor – this is very efficient, but only operates when your engine is running. Usually the same compressor powers both a refrigerator and freezer. There can be issues with controlling temperature as in some installations items in the refrigerator section will freeze if the system is run too long.

2. DC power from battery bank – is efficient but results in heavy current draws,

3. AC power from generator and/or inverter. Very efficient but note that quite a large inverter is needed due to refrigeration’s high start up current draw.

4. A combination of above – is ideal.

I haven’t included LPG powered refrigeration as with a pilot light it’s regarded as unsafe for marine applications.

Whatever system is used stainless steel lined appliances seem to work better than plastic lined ones and those with built-in brine plates make them even more effective. A big advantage of systems 2 and 3 is they invariably allow for continuous operation on shore power using a battery charger in the case of DC or an inverter generally passing current directly through to the appliance in the case of AC.

On our last boat we used AC power from our genset or shore power and found that worked extremely well.Depending on the ambient temperature and the number of people aboard (more people = more “drain” on refrigeration) we ran the genset for about 60-90 mins morning and evening. During that time we’d also charge the batteries and often do some washing, heat the hot water tankanduse the water maker.

Rapport hasan Engelrefrigerator (with a small freezer section) in the galley powered both by AC and 24V DC plus a combination refrigerator / freezer powered by an engine driven compressor. The latterworks fine if you are cruising every day, but if anchored or staying in a marina for several days we had no freezer without running an engine for a couple of hours a day, so we decided to install an AC powered freezer on the flybridge. On boats we prefer chest to front opening freezers. The latter are more convenient to use but in our view not as effective. Where possible and mainly due to price we believe it’s best to use standard household appliances so we chose a 220V powered Haier HCF101 chest freezer with 101 litres capacity costingonly $439 (about 242 Euros). We installed a double AC power point in the flybridge and the freezer is protected from weather by the flybridge’s vinyl screens. When on shore power our inverter passes incoming AC current directly through to connected AC appliances. Underway with the engines charging the batterieswe use the 4.1Kw inverter to provide AC power and at anchor we also use the inverterwhile using the genset to periodically boost the batteries. We find the refrigerator and freezer combined draw less than 5 amps. Since our cooking is electric we need to run the genset during the evening in any case and can then also heat our hot water and sometimes use our water maker.

This is the compressor driven chest freezer located in the cockpit 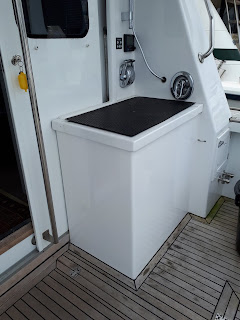 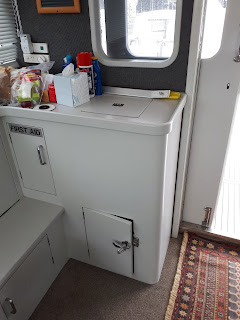 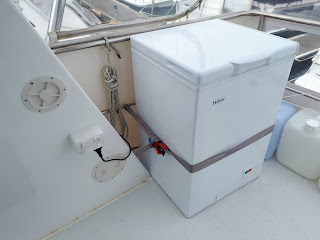 1. Pack your refrigerator and freezer as full as possible to make them operate more efficiently. Use different sized bottles of water to use up any spare space.

2. Turn them OFF or down during the night to conserve battery power. When not being opened they lose little temperature overnight.

3. Use your thermostat – when you have charging power available turn the thermostat down (ie colder) so the appliance runs more or less continuously and when you have no power turn it up so it runs less.

4. Use your freezer to freeze bottles of water. Each day or two put some in your refrigerator to help keep its temperature down. As the water bottles thaw use them for cold drinking water and replace.

5. If you have more food and drink to keep cool than your refrigeration capacity allows use your freezer to freeze a few bottles of water and freezer pads, thenstore additional supplies in an Esky, changing the bottles over every couple of days. This is particularly good for bulky vegetables and salads as well as wine and soft drinks (beer needs to be colder!)

6. Cans of drinks store more easily, are easier to dispose of and seem to get colder than glass or plastic bottles.

The five-hour return hike to 3,300ft (1,005m) Mjelkhaug is a combination of two other hikes: a three-hour circular loop to Nordjfell, with a one-hour extension to Varhaugselet and an additional hour to reach Mjelkhaug. All three hikes have excellent views west into Hardangerfjorden, while from Mjelkhaug you also can see the Folgefonna glaciers. On another…

The large TV tower atop 2,375ft (724m) Kattnakken on the island of Stord was a common sight as we traveled around the mouth of Hardangerfjord. We first spied it from the summit of Siggjo on the adjacent island of Bomlo, and decided that would be our likely next hike. From the anchorage at Karihavet, we…

1555 ft (474m) Siggjo on Bomlo was prominent in the skyline north of our anchorage at Karihavet near Moster. And if the summit was so visible, we could be sure the views from the top would be excellent. Our second day at Karihavet dawned beautifully clear, so we set off in the tender to hike…

According to Norse legend, the first Christian church in Norway was established on the island of Moster in 995. A millennium later, several notable projects in the area included the construction of the Kulleseid Canal in 1856, the Royksund Canal in 1859, and a successful limestone quarry at Mosterhamn on Moster. The canals remain operational…

The Case of the Missing Oil Leak

An engine seldom “just gets better”—close to never—but our generator was leaking vast amounts of oil from the rear main oil seal prior to the cylinder head replacement. If the generator sound attenuation shield front cover was removed during operation, it would spray the engine room floor and the neighboring wing engine, creating a real…

Our last post spoke too soon as no sooner had I mentioned NZ’sreturn tounrestricted cruising than the Auckland level 3 lockdown commenced on 12 August until the 30th. This time there was no room for confusion as all forms of boating were clearly identified as not permitted.

Di and I rarely do cruises under several days and prefer cruises of ten days or more. With this in mind our next project is to cruise for about a month from mid October to re-visit one of our favorite areas, the eastern side of Coromandel Peninsula including The Mercury Islands and Mercury Bay. For part of this time we’ve rented a berth at Whitianga Marina for a very reasonable $40 per night (in the Med we’d pay three or four times this) making it easier for family and friends to join us. I plan to cover that trip extensively in the Blog and we’ll also be publishing an article in the Pacific Powerboat magazine about it.

I want to talk a bit more about our new Salthouse 52, “Rapport”.

When we bought the boat we definitely knewshe had “good bones” and presented extremely well with extensive upgrades including engines and gearboxes removed and rebuilt 900 hours previously, new Furuno electronics, recently added water maker, new house and start batteries and exterior repaint. The survey confirmed her good condition, but as they invariably do it also identified a few issues needing attention.

Over the last few months we’ve attended to these issues as well as a host of other improvements to convert her from a full-on game fishing boat to a comfortable cruising boat. Much of this process hasbeenmaking existing equipment work correctly.

Some of the more major projects have been:

1. Projects we expected to do:

-The pulpit was poorly mounted and attached only to the teak decking rather than being through bolted.

It was removed and tidied up, an access hole made in the fore peak so the pulpit could be bolted to the alloy deck, the teak deck was thoroughly dried and the pulpit was properly and rigidly bolted down in a bed of sealant

-Paint blisters under the beltings (where the hull meets the deck) on both sides were opened, the alloy underneath ground back, treated for surface oxidation, filled, faired and painted

-ReplacingPSS prop shaft sealswith Kiwi sealsincluding replacement of all bearings. At this time the prop shafts were also crack tested and straightened by Henleys, then realigned. The props were checked and found to be in good shape

-Comprehensive service of genset including installation of primary filter, recondition of heat exchanger and some electrical work. Supply of 220V charger for genset battery

-Replacing all Teleflex hydraulic steering hoses and many fittings

Apart from the above PSS shaft seal issue we’ve not encountered any problems during our ownership except for a leaking fresh water circulation pump (solved with a new outlet fitting), a loose wire on our genset’s starting circuit and a failed high voltage shunt which turned out to be redundant and not needing replacement.

So now we’re down to a final few projects including an exterior sun shade for saloon bow facing windows, cockpit canopy, safety rails around flybridge access hatch and gas assisted struts for an extremely heavy lazarette hatch. Then hopefully all set for 2020/21 cruising.
← Previous 1 2 3 … 478 Next →